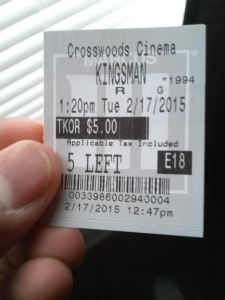 “If you’re prepared to adapt, you can transform.”

Whether you’re kicking butt, or just hanging out and such, if you’re a Kingsman, you are always doing it in impeccable style. Kingsman: The Secret Service focuses upon a secret organization that values manners and style just as much, if not more than combat skill. During one high-pressure mission in 1997, high-ranking member Harry Hart (Colin Firth), loses one of his colleagues and feels responsible for it. To atone somewhat, Hart pays a visit to the deceased’s widow and young son, leaving behind a medal with an engraved phone number that promises to give help in dire situations.

Fast-forward to the present day, and troubled but talented young man Gary ‘Eggsy’ Unwin (Taron Egerton) is now the sole possessor of that medal. When Eggsy finds himself in a pickle, he makes the call and is saved by Harry, while finding his connection with the organization. With an opening within it for a new “lancelot” agent, Eggsy is put into a rigorous selection process with several others candidates. As this is happening, a mysterious threat begins to rise under rich man Richard Valentine’s (Samuel L. Jackson) lead, a threat that has global implications. 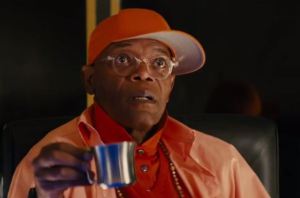 Even though it may be fun to rib about when it occurs, not every film that is pushed back from its original debut date has an automatic destiny of doom. Now more times than not, delays do little to salvage the final product, but every now and then a postponement does what it aims to do: Smooth the rough edges, fill loose holes, etc. Kingsman: The Secret Service bucks the trend of the traditional low quality that comes with films being pushed back into the period of “Dumpuary,” and brings a solid crowd-pleasing good time to an old-school template.

Really, the reason behind the postponing is unknown. It is very possible that Kingsman is the exact same movie now that would have released months ago, and the delay was for strategic box office reasons. Regardless, perhaps I should have had more faith in Matthew Vaughn, the director who restored/brought two different comic-book franchises to life in Kick-Ass and X-Men: First Class and does so again here. Vaughn again serves as an architect, giving weight and intrigue to a story, world, and characters lifted from its respective comic.

Seen early on in the movie through its characters, world, story, and even score, it is undeniable that there is an affectionate soft spot for the spy tales that came before this. Pieces of Bourne and 24 are evident, but let’s face it: the Bond franchise is the inspiration for much here, elements both shaken and stirred into parody and tribute. Yours truly has never been a crazy 007 or spy movie super fan, so sometimes it is hard for interest to be had with them. Kingsman’s story isn’t amazing, and from time to time it is all over the place tonally, but one aspect it does have going for it is unpredictability. That alone keeps interest throughout.

All of the previously mentioned is well and good, but if there is one thing Vaughn can take to his grave, it is the fact that he knows how to exhibit balls-out and over-the-top sequences of action. In these scenes of complete anarchy, there’s a frenetic fluidity that exists to them. It is a pleasure to watch, but a bit below undeniably satisfying. Why?

Yours truly usually isn’t a bloodhound (I’m more of a pug), but it was somewhat surprising that little to none of the red stuff was present in the notable moments. While I do believe that blood for blood’s sake gets old also, it is very odd to see a body sliced in half with no messy aftermath, and this continues. Maybe that plays into the whole lack of seriousness here; this very much feels like a fabricated world compared to something like Kick-Ass. That too had unbelievable happenings, but was grounded and built upon the idea that when fantasy moonlighting meets everyday real-life, the consequences are not pretty and rather brutal, which made for more satisfying and impactful action. At the end of the day it might just be a personal preference.

Part of the draw of Kingsman is witnessing actors in nontraditional roles. Look no further than Colin Firth as a dapper, erudite, dry-witted individual who only throws down when he has to. Firth is a hell of an actor, but seeing him look so effortless in combat is mindblowing. Also flipping the script from his usual work is Mark Strong as one of the good guys lending support to the youngsters. He may not have a ton to say, but his presence is noted. The most meta-roles belong to Samuel L. Jackson and Sofia Boutella as the blade-legged Gaselle. Every cliche and commonality found in villains appearing in spy movies is present with Jackson these two, and it is pleasant fun, if a tad overused as this progresses.

Credit has to be given to Taron Egerton, not first-billed on the marquee but showing a lot to many witnessing his work for the first time. It would have been real easy to not care for and maybe even dislike his character of Eggsy, but his character is written well and Egerton brings a load of charisma to support it. He may be one to watch with the requisite star look and ever-developing chops.

Though there may be a few blanks fired here and there, Kingsman: The Secret Service is hyperactive, irreverent, and does what it wants to do. Kingsmen may have there own rules, but this film plays by its own set.

10 thoughts on “Kingsman: The Secret Service”