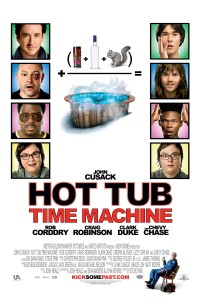 “It must be some kind of…hot tub time machine [blank stare into camera].”

Uses for a hot tub: Skinny dipping, relaxation…and time travel? In Hot Tub Time Machine, the year is 2010, and for Adam (John Cusack), Nick (Craig Robinson), and Lou (Rob Corddry), life could not be any worse. Adam has just lost his girlfriend, Nick cleans feces out of dogs for a living, and Lou is a pathetic, lonely alcoholic with suicidal tendencies. The negativity in their lives should keep these former friends in close touch, but it actually serves as further separation between the trio.

After a near-death experience by Lou, Adam and Nick decide it is the perfect time for the old gang, plus Adam’s nephew Jacob (Clark Duke), to reconnect. Back in the 80’s days, the three friends used to take part in many debaucherous weekends at the Kodiak Valley Ski Resort, so Adam & Nick conclude that this is the perfect place to make some new memories. A night of getting plastered in a hot tub improbably transports the crew back to 1986. Could a hot tub really be a time warp? And if so, how do these guys get back to the present day?

Sometimes a title tells the audience everything that needs to be known about a film. Take Snakes on a Plane for example. With a title so unambiguous, no surprises are going to be found, and what you see is what you get. Hot Tub Time Machine is no different. Absurdity and vulgarity is found in spades here, and while it it gets to be a little too much from time to time, as a whole it is a pretty entertaining comedy.

Rooted primarily in the 1980’s, HTTM does a good job of not using the decade as a crutch for so much of its comedy. That isn’t to say that there aren’t references, both to happenings during the time period and to 80’s classics movies that may give the movie more humor to those that lived during the period, but most of the funniness spawns from the gross out gags and raunchy dialogue. It is pretty funny, but even for a R-rated comedy, there is an abnormal reliance on profanity. Some parts are delivered well, while others parts are groan inducing and feel like the producers ran out of ideas short of spewing tons of curse words in the given moment.

The plot isn’t all that memorable and some continuity issues exist, but since the film doesn’t take itself too seriously they can be overlooked. There are some end twists that are far-fetched but also pretty hilarious and make up for the otherwise predictable plot. HTTM tries to carry some heart as well, delivering a message of friendship through thick and thin, as well as having the opportunity to do things differently if given the chance. Plot-wise (or maybe pacing-wise) the film struggles the most when it introduces a character who is there to deliver the central message in addition to being one of the guy’s love interest. Whenever she is on screen the film, while not fast paced by any means, really bogs down substantially by telling us things we already know.

Hot Tub Time Machine is dependent on the comedic chops of its starring foursome, and some deliver more than others. Receiving top billing is John Cusack, who basically plays the straight man throughout the entire movie. It is sort of a role that anyone could have played, but the movie does have a good time poking fun at Cusack with little Easter eggs alluding to his 80’s fame. Of The Office fame, Craig Robinson is probably the most versatile of anyone here, from a comedic standpoint. He definitely gets his chance to be over the top during various points, while also playing off the ensemble when needed.

Robinson is good, but Clark Duke and Rob Corddry’s respective characters are the most memorable. Jacob is completely the fish out of water in this, and seeing his reaction to various situations is pretty awesome, relying on timing and extremely dry delivery to bring laughs. He also possesses much chemistry with Corddry, who is absolutely a complete riot. His performance as Lou is impossibly hammy and unbelievably profane. Sure he is a jerk, but he has enough likable qualities to care enough for the guy. The movie is built on an ensemble cast, but Corddry easily steals the show.

Don’t expect greatness in cinematography. This is pretty standard filmmaking from every aspect. 1986 looks convincing enough in dress and exterior, which I imagine isn’t too hard to achieve. The soundtrack features 80’s cuts that should bring nostalgia to those that lived in the era. Again, nothing truly deserves a ton of praise technically, aside from an unpredictable fight sequence near the end involving Enrique Iglesias.

With a sequel on deck, Hot Tub Time Machine will probably get more attention as the months go on. Though occasionally dull and needlessly crass in areas, its sheer ridiculousness along with a game Rob Corddry is worth a dip in this comedy’s tub.