The ape uprising is over, and their dawn is fully upon us. Dawn of the Planet of the Apes occurs 10 years after the events of Rise of the Planet of the Apes, and it is now a whole new world. The ALZ-113 virus, otherwise known as the Simian Flu, has spread to every corner in the world and consequently has wiped out a substantial part of the human race. Though a small part of the human population is immune, there is no indication as to how large this pool of survivors is.

Meanwhile, the ape nation is experiencing an era of prosperity, led by their unquestioned leader Caesar (Andy Serkis). He has built a civilization in the Redwoods that is rooted on family concepts and the unbreakable bond these apes share. It has been a while since Caesar and others have seen humans, so they rightfully assume that the entire race has perished.

Or so they thought. One day, a band of human survivors looking for a critical piece that is the key to their survival stumble upon this new civilization. Immediately there is uneasiness, but understanding as well. Both sides coexist tenuously but appear to get what they want until all hell breaks loose. At this point, the rubber will meet the road as humans and apes will collide with the future in tow. 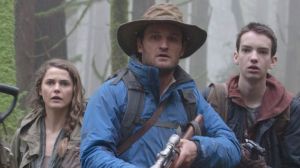 On all fronts, Dawn of the Planet of the Apes is a spectacular film. It isn’t easy to improve upon things that were so well done in Rise of Apes, but the heights achieved here surpass anything done in its predecessor. If 2011’s film has yet to be seen for whatever reason, please, see that before this. Not only is it a great work in its own right, it will give that much more appreciation to this film.

Back to today’s feature presentation though. Part of why the movie is so enthralling is the attention it gives to character depth, both apes and yes, even humans. Caesar is once again the focus, brilliantly acted by Andy Serkis. In this, he has become even more fleshed out than before. He is not just a father to his kids (one newborn), but also serves as a father, leader, and general to his entire nation. You can tell that the stress of it all really gets to him, as he knows that one slight misstep on his part sets his civilization back to a figurative place they never want to return to.

Serkis is simply outstanding, and his performance is jaw-dropping. When he speaks, he does so with conviction, but he is even more impressive when he does not. Everything that Caesar is contemplating, feeling, and internalizing is clearly visible facially, especially in the eyes. When I see Caesar on screen, I do not see an actor playing a chimp, I see a chimp. It is a testament to the stellar CGI and motion capture but also the commitment by Serkis to mastering little animalistic details that make the investment in his character so much stronger for the audience.

While definitely the biggest star, Caesar isn’t the only star. Maurice, Rocket, and others return as key cogs to round out the ape faction, but it is Koba who firmly plants his presence in the franchise. As a result of the inhumane testing done upon him in the first installment, this guy harbors a lot of disdain for humans, and it is understandable. His pain, both physical and emotional, help to create a character with many layers and grey shades.

The human characters are even interesting. Even if not on the intrigue level of their opposition, their plight is one I found myself caring about. Jason Clarke portrays Malcolm, the man who finds himself most often in contact with Caesar, and the film does a great job at making parallels between the two. At the core, they are the same. Malcolm, like Caesar, is doing everything in his power to protect his family (Keri Russell, Kodi Smit-McPhee) and make for a better future for the ones they love. There is a bit of skepticism, but also a healthy respect that the two give each other. Gary Oldman also is of note, and while he doesn’t appear a ton here, it is pretty clear on how his character mimics another. It is this sort of parallelism that shows that the two groups have way more in common than they realize.

Additionally, Dawn of Apes has some important messages to say. One main message is this idea that we cannot let our singular, initial experiences shape our entire idea of what those “other” people are like. It may be a simplistic message, but how it is executed in the movie is flawless. There is one moment that I am not going to spoil in particular that made me think of American History X, and if you remember the dinner table scene from that movie, you may find what I am hinting at here. So much in the movie hits emotionally, and it never feels forced.

Production-wise, they do not get much better than this. It has already been a great year for technical blockbuster brilliance, and count this as part of the highlights. San Francisco and the resulting area returns as the backdrop for the movie, and everything is fully realized in amazing detail, from the sprawling redwoods to reduced rubble. Director Matt Reeves really knows to encompass scale; there is nothing like seeing Caesar’s army of apes follow diligently behind whether on foot or by horse. Action sequences and sound mixing are a thing of beauty, and every clash and shot fired is captured in full. The score, sort of a bland existence from the previous movie, adds immensely to the scope of everything.

Dawn of the Planet of the Apes is a film that cannot be missed. Featuring complex characters, an emotional script, and superb effects, it is unlikely to disappoint. It is not just an amazing summer flick, it is just an amazing flick, blockbuster season or not.

19 thoughts on “Dawn of the Planet of the Apes”