In a perfect world, each piece of media stands alone as its own, absent of comparison and lens-holding to similar things and works. That’s not always how the world works, however, and sometimes, it’s easier and more effective to analyze things as the sum of parts. When looking at the two most recent pieces examining one of America’s and the world’s greatest and unequivocally pure good guys in Won’t You Be My Neighbor? and A Beautiful Day in the Neighborhood, they work amazingly—and better in the case of one—as a tandem.

Of the two, the documentary Won’t You Be My Neighbor? stands strongest alone, very much the “theory” of this two- part unofficial double feature. In a little over 90 minutes, director Morgan Neville delves deep into the philosophy, demons, stressors, backstage happenings, and everything in between that made up one Fred Rogers and the resulting show that made him famous. Very quickly, the viewer is introduced to the fact that inauthenticity and pretentiousness didn’t exist in the DNA of Mr. Rogers; there was little difference between who people saw on the screen and who he was when the television lights went on. 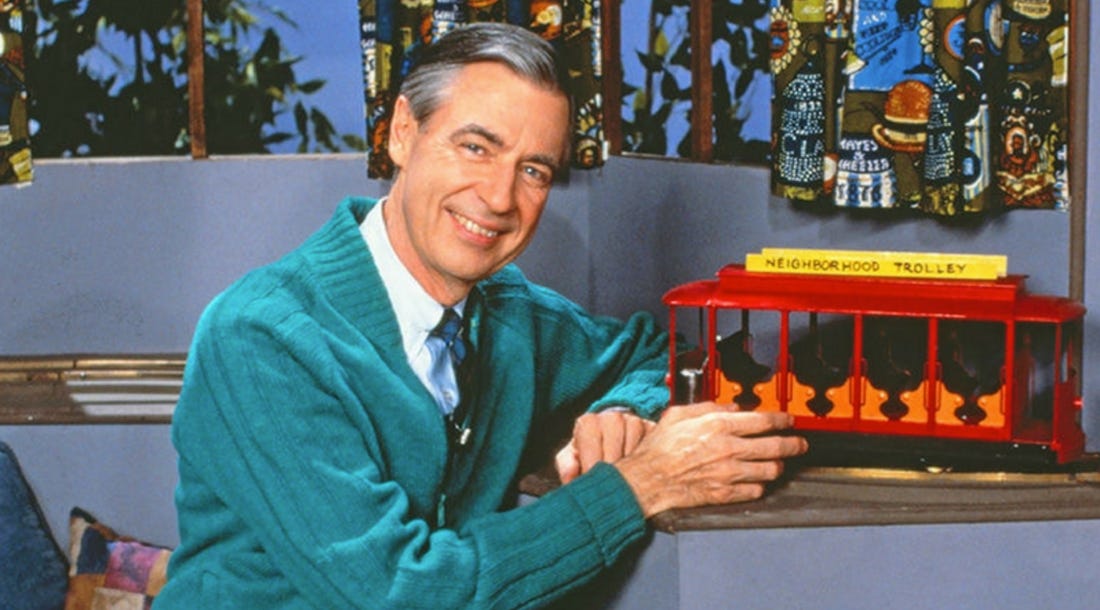 So, in some ways, what is seen in the documentary only calcifies Fred’s standing as a sweet-natured, honest-intentioned, 99.9% infallible human being. Still, Neville and all the subjects who appear within the doc are apt to remind viewers that for all that Fred was, he was undoubtedly human—a being a who processed pain, masked feelings/uncertainties, and made sense of trauma in therapeutic ways that allowed him to reach so many youngsters and people who made up his life. For Fred, that was using his show, various puppets, characters, and the like to tackle matters that might have seemed way too blunt and dark for children’s programming. His velvet demeanor helped to deliver the sides of life in an accommodating way to impressionable minds. Nothing was phony about him.

Since Won’t You Be My Neighbor? is the theory, laying down the groundwork and guts of Fred, that naturally makes A Beautiful Day in the Neighborhood the application; “the legend” portion of this double feature with the documentary highlighting what could be considered “the man, the myth” segment. In this biography, the focus isn’t on Fred, but Lloyd Vogel (Matthew Rhys), a cynical journalist who has built a successful career on being a pessimist but is starting to see the absolute downside of ripping people apart with waning connections. He’s sent against his desires to do a story on heroes and his assignment is Mr. Rogers (Tom Hanks), one of the world’s greatest heroes. Though the news came out ahead of time that Marielle Heller’s directed feature wasn’t really about Rogers, it remains a significant surprise when watching with that knowledge in hand seeing A Beautiful Day in the Neighborhood and the pronounced focus on Lloyd. Part of his story is compelling. Some of it, not so much. Still, A Beautiful Day in the Neighborhood gains significant appreciation (from yours truly at least) when one sees it as a case study, Exhibit A of how Fred transformed everyone he came across, whether through the tube or in person. Heller uses a unique framing method to bring the story together; at the very least, it’s not a traditional biopic. The ever-reliable Hanks is just that here, clearly doing his research and probably the best option to play Fred. Rhys more than holds his own opposite him, despite parts of his character’s familial drama being monotonous and painstakingly melodramatic.

On its own, A Beautiful Day in the Neighborhood is somewhat forgettable in totality, even as the services of a legendary thespian are employed. But viewed in succession with Won’t You Be My Neighbor?, it’s hard to imagine one of America’s cultural icons being represented any stronger.

2 thoughts on “Double Feature: Won’t You Spend a Beautiful Day in the Neighborhood?”