April 6th, 1917. World War I still hangs in the balance between the Allied and the Central Powers. However, the pendulum could swing over the next two days. Why? The English forces are set to walk into a trap, one that the Germans have provoked by retreating from their advantageous position.

Retreating is the only option for the Brits; trouble is, communication is down. With the scenario set, General Erinmore (Colin Firth) sends two young soldiers in Blake (Dean-Charles Chapman) and Schofield (George MacKay) to deliver the message to the frontlines. Time is the enemy, as the English squadron stationed is set to attack the next day. If the mission weren’t already urgent enough, Blake’s older brother is in the heat too. 1600 lives are dependent on this message delivered successfully, a huge responsibility for two people to bear.

There are three certainties in life. Death, taxes, and any movie the living legend cinematographer Roger Deakins lends his Midas touch to looking breathtaking. Whether collaborating with Denis Villeneuve, The Coen Brothers, or in 1917, Sam Mendes, he’s able to capture the vision and tone his directors need to create unforgettable settings. 1917 is astonishing in one regard, and average to good in others.

To call 1917 “balanced” would be incorrect. From the reveal of the trailer to the news of Mendes making his feature appear as if it was shot in a single take, it was clear that the focus would be on the filmmaking. Easy to see why. 1917 is flawless from that perspective, with Mendes/Deakins accomplishing this from the get-go. Through a combination of varied angles and spatial awareness, the duo creates a tangible sense of dread and danger in almost every steps its on-screen duo take. I’m not sure if any film has done this to this high a level since Sicario (also employing the services of Deakins) in its border and tunnel scenes. For 70 minutes, you’ll wince with worry as Blake and Schofield traverse barbed wire battlefields, worn-down bunkers, and still bodies of water laden with literal bodies.

Mendes also serves as one of the writers for 1917, an original screenplay co-written with Krysty Wilson-Cairns exclusively based off of a story nugget(s) courtesy of Mendes’ grandfather, Alfred. On one hand, 1917 is rather impressive with how much juice it gets out of a secondhand tale (or tales). On another hand, the simple story of messengers delivering the word shows its limitations around the hour mark, where a prolonged sequence underground brings the movie to a halt before picking up again with two stunning mad dashes framed in medium-wides. The characterization is just too light for this scene to mean much emotionally as it intends to do. This last want is going to sound like yours truly is one of those teenage boys Michael Bay once famously proclaimed he made movies for, but man oh man, it’s a crying shame that with its exquisite technical merits, 1917 doesn’t have an unbridled war set piece that undoubtedly would have rivaled anything seen in Saving Private Ryan.

Despite little being revealed about their respective characters as the film goes on, MacKay and Chapman deliver sturdy performances that highlight their fear and showcase their bravery in what essentially amounts to a suicide mission. The duo is perfectly cast, as having clout-y, recognizable names in starring roles would surely overshadow the “thankless” aspect 1917 sort of implies. Big stars such as Firth, Benedict Cumberbatch, Richard Madden, and Mark Strong appear in single scenes as military leaders to add bits of gravitas and serve as a breather when necessary. 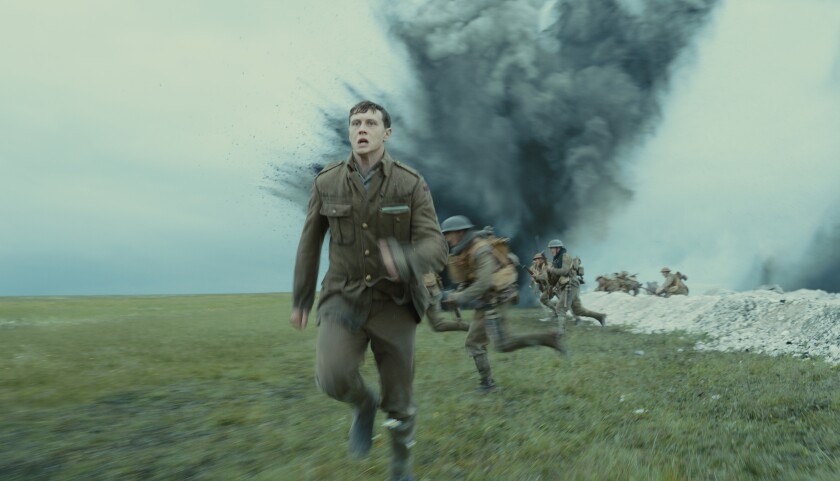 The comparisons to Dunkirk are fairly apt. It’s conceivable to imagine that if you adored how Christopher Nolan went about matters there, the same sentiment will be experienced in 1917. Regardless of how you want your war films to be narrative-wise, there’s no denying that the craftsmanship of Mendes’ latest is probably the best 2019 has to offer, if not the decade.