When’s the last time any good was found out at sea? What David Greer (Gary Oldman) needs to find is a new beginning with his family. He and spouse Sarah (Emily Mortimer) are in the process of rebuilding trust with one another while committing to be great parents to daughters Lindsey (Stefanie Scott), and Mary (Chloe Perrin). David sees their new beginning in the form of a yacht, known as “The Mary.” Sure, it’ll require selling their cars and doubling up here and there to make things work, but his family is behind him. For the first time, he’s the captain of his own ship. Purchase made.

There’s a bevy of history lodged in the pillars, cockpit, and everywhere in between. Everyone who’s taken this maiden voyage on Mary has vanished, somehow being led to the Bermuda Triangle, something David writes off as unconfirmed sea tales. Eventually, weird inexpiable happenings occur, and the Greer family is surely destined to suffer the same fate–if not worse—as those who too took a spin on the USS Mary. 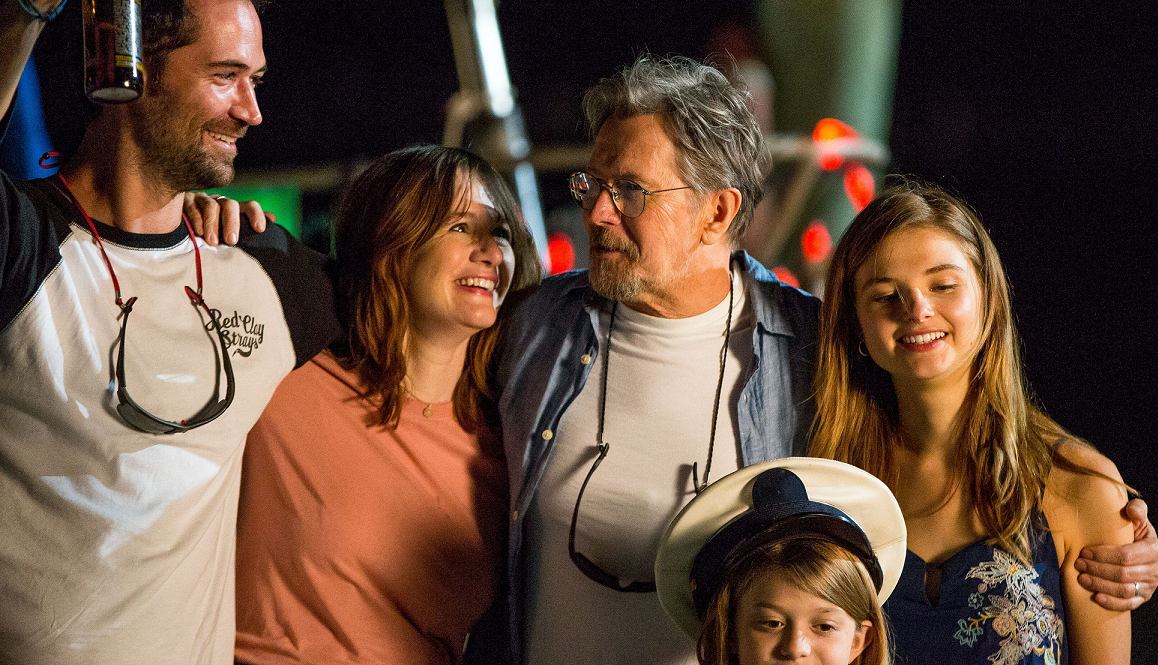 Ghost Ship meets The Shallows meets Sinister? Not an inherently bad premise, which is what Mary works with. However, the question must be asked, which comes up about a quarter of the way through. Has a legitimately good wide-released nautical horror movie set predominately on a ship/boat/yacht that isn’t Jaws/Open Water ever been made? The evidence points to no, and Mary isn’t changing that.

The Shallows connection is evident, as Mary’s screenplay is written by that movie’s writer, Anthony Jaswinski (plastered over the eyesore of a poster). That movie specialized in no-frills leanness, and Mary’s run-time of 84 minutes (including credits) would suggest the same. Problem is, there’s a little more going on under the deck that goes unexplained. Clearly, the ship is haunted, yet its esoteric properties, lore, how it can do certain things, and what specifically it’s doing to its tenants is muddled, with a standout moment for the wrong hilarious reasons being young Mary smashing a drinking glass into the face of her older sister Lindsey. Mary feels like a series of odd, unfortunate happenings with no connective tissue designed to be horrific and nail-biting.

The narrative format Jaswinski employs doesn’t do many favors in the department of unpredictability, as we see Sarah giving her account to Detective Clarkson (Jennifer Esposito) throughout the feature beginning with the start. This too strips away any chance of tension that may have otherwise been there. In totality, all of this makes Mary a lengthy 84-minute watch barreling to a predictable conclusion, seasoned with habitual jump scares led by director Michael Goi and a budget that shows big limitations near the end.

The Hitman’s Bodyguard. The Space Between Us. Hunter Killer. Criminal. All films that surrounded Oldman’s Oscar-winning turn as Winston Churchill in Darkest Hour on both ends. It’s a long way of saying that as great as the actor is, he’s not that selective which is simultaneously endearing and perplexing. As talented as Oldman can be, having his presence in Mary is distracting. He’s not phoning it in, but his persona and status overshadows the film to the point where all one thinks about is “Why, Oldman, why?” None of his co-stars are poor, though Mary’s script doesn’t give them opportunities to make a presence.

The biggest positive of Mary? Many aren’t likely to give this a watch, as it’s VOD and I’m betting few even were aware of its existence. Everyone’s looking for that fresh horror movie to throw on each Halloween season to supplement their preexisting rotation. This ain’t it, captain.