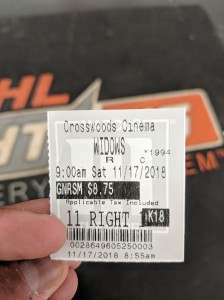 Hell hath no fury like women scorned. A precision-based criminal unit specializing in heists over the years in Chicago, Illinois meets their untimely end during one of them. In their demise, they leave their wives in Veronica (Viola Davis), Linda (Michelle Rodriguez), Alice (Elizabeth Debecki), and Amanda (Carrie Coon) attempting to pick up the pieces.

These pieces mostly include a debt owed to one Jamal Manning (Brian Tyree Henry), a powerful individual connected to Chicago’s criminal underworld with right-hand enforcer and brother, Jatemme (Daniel Kaluuya) on his side. He’s making a push to overtake the longstanding political family of the Mulligans, who have run the Chicago ward for ages, with that responsibility now being shifted to office alderman hopeful Jack Mulligan (Colin Farrell).

With money running low, Veronica investigates her husband, Harry’s (Liam Neeson) left behind outline for the next job. Here, she learns the identity of the other Widows, all in the same scenario. They could try to ignore the activity their mates participated in…or, pull this five million dollar job off, pay the Mannings the two million they’re after, and use the leftover funds to make new lives.

Widows is rooted around a heist, but to solely define it by that sub-genre would be misleading (the act itself ends as quick as it begins). And with that in mind, the expectations that some will have going into this might not align with the reality. If you can re-calibrate with that approach, Widows is pretty damn great. Not flawless, but impressive nonetheless.

It’s been some time since Oscar-winning director Steve McQueen (12 Years a Slave) stepped behind the camera to spearhead a feature. While his last movie certainly wasn’t starved for star power, Widows is undoubtedly a different animal, and the Brit’s first real attempt at delivering a “crowd-pleasing” (as loosely as that phrase can be applied) feature that simultaneously possesses an indie feel. Few directors know how to let a scene breathe and marinate like he does. Much like a few of his unforgettable scenes in 12 Years (the hanging scene still is etched into my brain), McQueen is perfectly fine with making things linger and subtly adding effects, whether a methodical pan or a tracking car ride with minutes of dialogue between two characters that never appear in the frame. Hans Zimmer reunites with McQueen again, delivering a richly textured score without overpowering the drama.

Adapted from a 1983 British miniseries carrying the same name, McQueen and writer Gillian Flynn (Gone Girl) throw a lot into the pot that is Widows. The duo make an intersected story where gender, race, politics are one in the same. To say it all comes together early and effortlessly would be a small stretch; the parts eventually fit but do take some time. Even then after a first viewing, there’s a belief that 1-2 story threads aren’t as tidy as others. However, Widows is probably the type of film that will lend itself to be even better upon repeat watches. There are no guns of Chekhovian nature present; McQueen and Flynn employ an acute attention to detail where anything and everything that makes an appearance for more than two seconds is brought up later.

The beefy cast is magnificent with nary a weak performance given. Even semi-underwhelming thespians/people accused of phoning it in through past work deliver here in Rodriguez and Neeson. Three cast members are likely to stand out. Kaluuya is an absolute terror collecting debts. Debecki arguably has the movie’s greatest character arc, starting one way and evolving into something else that is believable. Yet, it all starts and ends with Davis, showing all  the range she’s got in her toolbag and then some. The only downside about a cast this sizable that does this well is the simple fact that not all characters are treated equal or as integral as painted to be. You’ll wish that some had more attention given, which is where the medium of television lends itself to doing so a little better at times in an episodic format.