Tell the truth…or at least your version of it. After the assassinations of his brothers John and Robert, Massachusetts senator Ted Kennedy (Jason Clarke) is the most prominent living member of the prestigious Kennedy family. It is 1969, and Ted is coming up on the end of his six-year senate term and turning attention to the 1972 presidential election. He stands a great chance of winning, his campaign being helmed and flanked by cousin Joe Gargan (Ed Helms) and childhood friend and fellow politician Paul Markham (Jim Gaffigan).

The missing key is recognized to be Mary Jo Kopechne (Kate Mara), a talented political strategist who has become saddened with grief after serving on Robert’s ill-fated campaign. Mary attends an annual party organized by Ted at Chappaquiddick Island honoring those contributions to Bob’s campaign. As the two step out at night and take a ride to talk a little further, Ted drives his car off the bride into a lake, which sees Mary drown to death. Knowing immediately his presidential dreams could be over, Ted struggles to maintain control and do the right things as his Kennedy name weighs heavily in every step of the way. 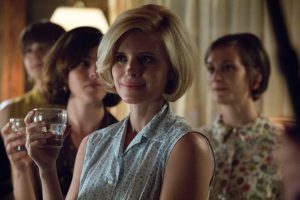 With the Kennedy name being baked into the history of America for decades upon decades, it really is a surprise that a proper movie regarding the bizarre event of Chappaquiddick had never been made until now. It’s not quantifiable, but I always ask myself this question after viewing a historical drama/thriller/biography: Am I more or less interested in this event and/or person after watching? Don’t know if Chappaquiddick can be called completely compelling, but light-shining and relatively interesting? Sure.

Chappaquiddicks‘s directorial duties fall to John Curran (The Painted Veil). Yes, nothing is truly vivid, but the feel and the locale of 1969 Massachusetts is very authentic, and Curran does a great job in the editing room as it pertains to showing what’s going on in Ted’s head versus what’s coming out of his mouth. The biggest surprise of this feature may be the solid script penned by first-time feature writers Taylor Allen and Andrew Logan. Their weakest part of the script is probably the first 15-20 minutes, which is slightly sleepy and heavily reliant on the audience having more familiarity with the nuances and structure of the Kennedys that a good (read: younger) chunk may not possess. 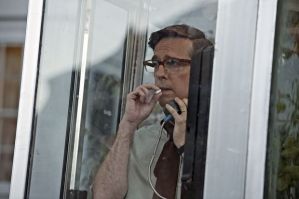 However, the duo’s script and Curran’s direction does take a surprisingly critical-yet-balanced stance of not only the incident, but the aftermath. While the morally corrupt legal system and those who make it up is nothing foreign, the way it unfurls—sometimes in a darkly funny way—along with the analysis of white privilege, male privilege/dominance (extremely telling that Kopechne is the only woman of note here) and the cross one can bear simply by sharing a famous family name does create for a fairly weighty story. There’s certainly frustration as only Ted Kennedy himself will ever know what exactly happened, but the widely known happenings and facts are presented to the audience and provide enough ammunition for both indictment and even sympathy of its central figure.

A large part of that is attributed to the superb work of Jason Clarke. In recent years, is there any other actor or actress of whom public opinion seems to vary film-to-film on with regards to their true talent? Regardless, this is a career-best performance of Clarke’s, showcasing layers of Ted’s complicated mental makeup and life in the spotlight wrapped in a super-convincing Bostonian accent. Not as convincing in their accents are Ed Helms and Jim Gaffigan, but both shed their comic personas for serious supporting roles, with a powerful standout moment Helms gives at the end that drives home how powerless people can be going up against a family that fancies themselves as an institution. As the two figureheads in protecting Ted’s legacy are Robert McNamara and Ted Sorenson, played by Clancy Brown and Taylor Nichols, individuals who will stop at nothing to change the court of public opinion. In limited screen-time, Mara and Dern are wonderfully understated in alternate ways and represent the moral consciousness (and lack thereof) of American politics and how these individuals can choose to deal with it.

Chappaquiddick isn’t exactly enthralling, but it makes me answer “Yes” to the question posed earlier. Interesting tale of how history necessarily doesn’t have to be written by the victors, just influenced by them.