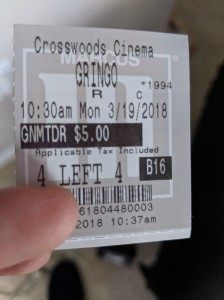 Do the right thing and play by the rules. This is the paraphrased mantra coming from his father that Harold Soyinka (David Oyelowo) has lived by. The Nigerian immigrant has set up shop in Chicago, married to Bonnie (Thandie Newton) and working for a pharmaceutical company called Promethium. It is run by his arrogant college friend Richard Rusk (Joel Edgerton) and his #2/screw-buddy Elaine Markenson (Charlize Theron).

Hard-working Harold keeps waiting for that big opportunity, desiring “carrots” but consistently getting “bananas.” His money is getting low as well, and bankruptcy is in his future. The job he does brings him to Mexico to deliver a revolutionary weed pill, and there he finds out what kind of dirt his company partakes in. Unfortunately, this puts him in deadly danger with the locals. But, maybe there’s a way for Harold to survive this ordeal and come out all the better for it? 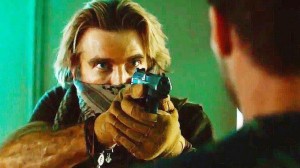 Gringo‘s a little tough to grab a firm feeling about. On one hand, it’s a comedy that is not uproariously funny, and probably whiffs more than it should on that front. On the other hand, it’s kind of an better-than-expected pseudo-drama/crime thriller thanks to the totality efforts of its all-star cast. If it isn’t already, by the time this is read, Gringo will be out of most theaters, barely clearing $6 million worldwide (and not a threat to get to $7 million from dollar theaters). But looking for truly dark laughs and a real heart? Gringo may be worth a glance.

Let’s mostly start with the negatives. The screenplay is co-written by Anthony Tambakis and Matthew Stone, two men who bat mostly .400-.500 going off of prior works (Intolerable Cruelty and Man of the House for Stone, Warrior and Jane Got a Gun for Tambakis). There’s a lot of superfluous plot threads and underwritten material in Gringo, oscillating between too much and too little. Particularly, two characters played by Amanda Seyfried and Harry Treadway never feel important into the story enough to warrant even the little screentime they receive. A disappointing turn of events for Seyfried, too, for she shares a good connection with Oyelowo the few times they’re together.

As stated previously, Gringo is mediocre at best and non-existent at worst when it comes to scoring humor. Some in the cast do better on this front than others, but the writing has to be pointed to first. It’s easy to see Gringo working as a limited series on network television or Netflix, as the setting and story lends itself well for better satirical jokes and stronger storytelling to be mined with higher consistency. When the movie’s not shooting for laughs, director Nash Edgerton—of course the real-life brother of Joel—gets an opportunity to stage some solid car chases and moments of violence that provide his movie with a bit of an uncomfortable edge.

Finally, to the good stuff! Gringo is not exactly what the trailers would lead a person to believe, as it is much darker and a mean-spirited than indicated. Honestly, the film is way more effective as a crime drama/thriller than black comedy. For all of the writing shortcomings, Tambakis and Stone do manage to pull off a few good twists that surprise. And, they give a ton of meaty writing to the lead character of Harold Soyinka.

Gringo entertains more than it does not because of the heart it carries, spearheaded by the performance of David Oyelowo. Harold’s evolution is one of the better ones seen in the genre. Oyelowo is by far the funniest person in the movie both in a physical and verbal sense, but it’s the dramatic moments early on (a 10 minute stretch in a hotel is gut-wrenching) that get a viewer to care to him, culminating in a legitimately satisfying conclusion. The only cast member who can lay claim to having significant comedy experience is Sharlto Copley, once again making the most of his screentime when called upon. Others like Joel Edgerton and Theron ham it up at times—especially Joel as the super-pompous CEO—but aren’t written with enough gusto to be anything more than that. 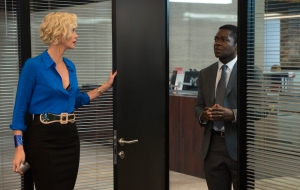 Gringo is missing the pure toe-curling highs of a great comedy. But if looked at as a hybrid film, those who like their humor mean with a person worth really behind might want to take a trip to Mexico.