Simon says to love oneself. High school senior Simon Spier (Nick Robinson) lives a great life by his own admission. He has the care of a wonderful father (Josh Duhamel), mother (Jennifer Garner), and sister Nora (Talitha Eliana Bateman). His friends are always there for him as well, be it his longest tenured ones in Leah (Katherine Langford) and Nick (Jorge Lendeborg, Jr.) or a newer one like Abby (Alexandra Shipp).

And yet, there’s something that eats at Simon daily. He’s gay, and is afraid to let anyone know. The first person he reveals this admission to is found on a school message revealing his sexual preference anonymously. In this forum, Simon, using a code name of Jacques, begins communicating with “Blue” and for once, Simon feels complete. As high school winds down and people look to secure what they want, Simon’s secret is threatened to be revealed, as is the perfect life he hopes to retain. 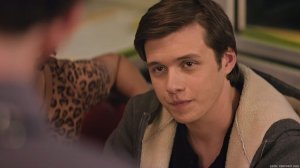 Love, Simon is one of those films that makes a person wonder why this hasn’t been done before. There’s no dearth of rom-coms or coming of age features, but combining the two feels novel. Add in a lead character different than most in these films and Love, Simon is the latest movie that adds to the revitalization of the genre that John Hughes made famous.

Adapted from the 2015 novel Simon vs. the Homo Sapiens Agenda penned by Becky Albertalli, Love, Simon is overseen by Greg Berlanti of Dawson’s Creek and Arrowverse fame. Berlanti uses his experience with shows that carry some similar teen angst aspects into this one. Fused with a subtle, introspective score by composer Rob Simonsen and lighting akin to a Hughes movie, it’s kind of impossible not to fall for the charm and heart this movie possesses. Heart is the key word; you can feel the passion that Berlanti, himself a gay man, carries for this project in every scene. He, along with screenwriters Elizabeth Berger and Issac Aptaker mostly deftly navigate a story that could easily be lost in translation from the pages to the silver screen, be it the tone or the storytelling method (cutaways, imagination, narration, etc.). There’s an non-telegraphed mystery that drives the plot even through dragging periods, and each time things look like they’re solved, more depths are revealed. At the end of it all, the journey and destination certainly are earned.

However, while carrying the groundbreaking distinction of being the first movie to be produced by a major motion picture studio that features a homosexual teenage protagonist, the feeling exists that Love, Simon is restrained; “soft-served,” or rather, not as all-encompassing as the script can feel. The PG-13 rating plays a small part in this. But a line early on of Simon stating he’s just like us is a little misguided. The intent is there, but it’s hard not to notice the idyllic environment that he is afforded that so many others in his position are not.  Additionally, some stabs at humor and certain characters in particular come off as shoehorned, perhaps better read than seen and heard. 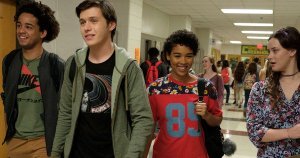 Still, Love, Simon gets its message across thanks to the talents of the cast. Coming a long way from Jurassic World, Nick Robinson gives a performance that hurts to watch at times, because of the authenticity. Whether gay or straight, his portrayal of a high school teen trying desperately to keep everything the same and be true to himself resonates with all. He runs the gamut of all teenage emotions, and it helps that he’s not written as a pure saint. Nick makes some questionable choices and seeing him have to contextualize them and live with the aftermath makes the lead character extremely layered and relatable. It’s fitting that by the end of the film, his layered upper-body clothing is replaced with a single one, fully representing the evolution he’s undergone.

The rest of the friendly gang and family perform well also, despite (obviously) not being as developed as lead character Nick. Katherine Langford and Josh Duhamel—Mr. Taco Bell himself—are standouts in particular. Langford may have the most heartbreaking moments…you’ll know when you see them. Duhamel is the parent that completely means well and does nothing intently maliciously, but unknowingly says that one or two things that hurt as much as something blatant.

Sure, Love, Simon can occasionally suffer from a super-sanitized portrayal of coming out. But, there’s something so endearing and passionate about this whole production that can’t be faked. Love may be strong, but Love, Simon is definitely like-worthy.