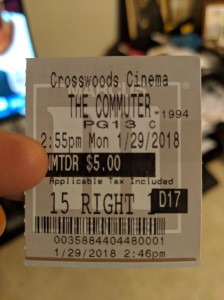 Should have flown. Oh wait…nevermind. Sixty year-old Michael McCauley lives as basic as one can in their sixties; mortgage, wife (Elizabeth McGovern), and soon-to-be-college-student son (Dean-Charles Chapman). He’s prepping for retirement in roughly five years from his financial adviser position, a role he took some years back after serving in the New York police force.

Costs a lot to send a kid through university, however, and Michael’s best laid plans are obliterated when life happens. On his daily ride home on the train, he’s approached by a “social experimenter” in Joanna (Vera Farmiga) who offers to solve all of Michael’s financial problems if he can do one thing: Find the person who isn’t supposed to be on the train, for they have something very valuable in their bag. Doing this nets Michael 100K, but failure to do so may result in loss of life for everyone on the train, and even those off it in Mike’s family.

Honestly, it’s fascinating how one Liam Neeson has not only created a genre for himself, but for other older actors and some actresses since Bryan Mills introduced his set of skills to the world in 2008 with Taken. Ever since that movie, it’s been a boom to Neeson’s career. There’s value in a person knowing what they’re getting. I don’t even know if The Commuter is bad. It just…exists.

No, The Commuter isn’t bad because it’s two stars are solidly good at their day jobs. Yes, two stars, one of them being director and longtime Neeson collaborator Jaume Collet-Serra (Run All Night, Non-Stop). His direction is a formula for these types of films, and it is arguably a carbon copy of Run All Night. But it is an effective one, nonetheless, taking advantage of a tight and enclosed environment for some occasionally tense moments. Additionally, Serra manages to direct a fight scene that is somehow simultaneously (strangely) impressive and laughable. Hard to explain, but a person will know it when they see it.

And of course, there’s Ol’ Reliable, also known as Liam Neeson. I’m saying nothing that is not clear knowledge now, but the fact is, he can play this role in his sleep. This means that while he’s not necessarily stretched per se, he does bring a level of professionalism, commitment to the material, and—arguably most important—lead star power—critical as this story becomes more incredulous as the runtime goes on.

Speaking of star power, The Commuter is up there with Run All Night with regards to consisting of the most star power of any Liam Neeson-led movie from 2009 and beyond, featuring the likes of Conjuring co-stars Vera Farmiga and Patrick Wilson, Jonathan Banks, and even Sam Neill. But, none make their mark on the movie, either entrenched as stock stereotypical characters (Neill, Wilson), or barely present at all to do anything (Farmiga, Banks). Farmiga in particular is a disappointment; mainly due to how the film sets her up.

The Commuter has an awesome set-up. That’s not hyperbole, either; Collet-Serra’s first fifteen minutes are wonderful in laying out the story of one man and his traditional, nondescript life through unique editing. The introduction of Farmiga’s character is brilliant, as is the dilemma she presents, evoking shades of the classic opposing philosophical theories debate of deontology vs utilitarianism. Around the point that Farmiga physically exists the film is when the plot goes off the rails, much of it relying on this idea that people can control every little minutia of a particular situation well ahead of it actually occurring. Collet-Serra’s writing falls back more on the “Eureka” moment that Neeson’s ex-cop experiences rather than a logical process of elimination with snuffing out suspects. Lastly, the ending is very rough, way too neat, and opening up way more questions than answers.

Collectively, Neeson and Collet-Serra the director deliver The Commuter to its destination—barely. Still, better trips are out there for the fare it takes to get on this train.

3 thoughts on “The Commuter”