Justice isn’t guaranteed, it’s earned. Young Thurgood Marshall (Chadwick Boseman) makes his living fighting injustices. He’s a traveling lawman for the NAACP, defending people of color who have been wrongfully accused of crimes they never committed. His latest assignment brings him to Bridgeport, Connecticut to defend a Joseph Spell (Sterling K. Brown), a black chauffeur who’s been charged with the rape and attempted murder of his provider, Eleanor Strubing (Kate Hudson).

Things take a turn when Marshall isn’t allowed to take the lead. Rather, the defense lead is given to the man who briefed him on the situation, Jewish insurance lawyer Sam Friedman (Josh Gad), who is reluctant to take the responsibility for fear it’ll tarnish his business. With Friedman having no experience in the criminal realm, Marshall has to lead from the side while Sam takes point, navigating a slanted judge and jury while being the only hope an innocent man has in avoiding life behind bars.

The latest biographical movie, Marshall, follows the trend of late for Hollywood biographical movies and/or events. That trend being, to focus on a specific period and/or event instead of the overarching life and/or story. This approach does streamline things and allows a sometimes-staid genre to be less conventional. At the same time, there’s a little missing in the way of character building when going about a “biography” this way. Marshall sees both ends of this double-edged sword, but the good largely outweighs the bad.

There’s a reason “biography” was put in quotations, not because of loose facts, but what the idea of a biography conjures up; i.e. a relatively deep and possibly somber dive into a subject. Director Reginald Hudlin (The Great White Hype) and writers Michael (real life Bridgeport attorney) and Jacob Koskoff choose to place much of the focus not on the meat of the lead characters, but the trial that they are a part of. Marshall is great as a courtroom drama, which happens to be most of the movie’s runtime. To spoil bits of it would be a disservice, as the case being one of Marshall’s first ones makes it likely (at least for this viewer) that only the history nuts will know of the verdict and all the twists and turns. Watching this with a bit of uncertainty makes for a relatively gripping finale. 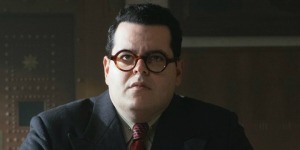 The case that the writers have selected from Marshall’s catalog is an intriguing one that places all attention on the legal proceedings, but in the process, does marginalize Marshall the man to an extent for a few reasons. This serves as a very surface level—almost Disney-like—look at Thurgood; those expecting great depths into the man’s everyday life and character will be very disappointed.

There’s a running joke going around many parts of the Internet that the film’s title should be Marshall & Friedman (aptly sounding), but it serves the point that Marshall is really a co-star and even a secondary player at times in a production named after him. The film itself takes on more of a buddy cop feel than foreseen, especially in tone, and the light one can be problematic. The levity is appreciated in spots, yet simultaneously undermines some serious moments, as does the mostly hokey score. Certain jokes simply do not need to be here. Whether delivery or timing, some dialogue is a bit odd-sounding and juxtaposes the noir-like recounts told by people on the stand.

After playing notable African-American individuals in Jackie Robinson and James Brown in 42 and Get on Up, it’s no surprise that Chadwick Boseman can carry the acting responsibility of portraying one of the greatest lawyers in history. The difference in his role, however, is that it seems to rely more on Boseman’s natural charisma and screen presence than those other two. He gets a lot of reign to show swagger and confidence that makes Marshall more of a dynamic watch than a history lesson. The dynamic he shares with Josh Gad is again an odd one in spots, but it works. Gad isn’t the strongest comedy guy turned serious actor, but he’s largely solid and better as the movie goes on. Rest of the cast is filled out by steady talent in Kate Hudson, Sterling K. Brown, Roger Guenveur Smith, Dan Stevens, and James Cromwell. A few characters can border on caricature, however; by and large the cast grounds them into enough realism.

The jury (of one) ruling on Marshall? Not a definitive introspective look at the man who would become the first African-American Supreme Court judge, but, a lighter-toned, relatively solid entertaining courtroom drama.

One thought on “Marshall”