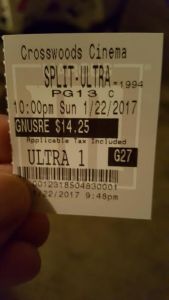 If a crazy person tells you something’s real, believe it. Shortly after a party held by one of her high school classmates, Casey (Anya Taylor-Joy) gets a ride from the party host, Claire (Haley Lu Richardson), accompanied by Claire’s best friend Marcia (Jessica Sula). Before even making it out of the parking lot, they are attacked by an unknown assailant.

Upon waking in what appears to be an underground lair, the trio of girls discover that the assailant is Kevin, certainly an off-man simply because he took three girls in broad daylight. But quickly, Casey, Claire, and Marcia realize that Kevin has Dissociative Identity Disorder, and each of his 23 personalities mean a different interaction each time. They’ve been abducted for a reason. A 24th personality, which Kevin’s therapist Dr. Fletcher (Betty Buckley) doesn’t believe to exist, could spawn, and this could mean trouble.

Having back-to-back successes isn’t a streak, but it does point the proverbial arrow up, or at least stabilizes it. With 2015’s The Visit and now Split, it would appear that director M. Night Shyamalan is undergoing a renaissance of sorts, or a “Shymalanaissance” as everyone seems to be calling it. Outside of the awards circuit, Split is a reason to hit the local cinema when typically the month of January doesn’t provide many, if any.

Yes, Split is a film aided by a view in the theater. Much like in the vein of 2016 features like Don’t Breathe and 10 Cloverfield Lane, almost all of the events that take place in the runtime are confined to one location. The feeling of claustrophobia runs at a pretty high level throughout, and Shyamalan captures the various chase scenes and perspectives of his antagonist brilliantly with differing high-low camera angles. Simple things such as conversations take on a higher level of importance here, and the camera fixates itself in extreme close-up mode often to display what characters are thinking, or transitioning into/out of. The score composed by West Dylan Thordson (Joy, Foxcatcher) is rather minimal, but one track in particular becomes etched into the brain and invokes a sense of dread.

Another reason to simply watch in theaters is the likelihood that the longer one goes without watching opens the chance of the movie being spoiled. This really deserves to be watched without any knowledge of what the major reveal is. With any M. Night movie, obviously, there’s the twist and/or ending. I’m honestly torn on how I feel about it. While being as un-spoilerific as possible, I’ll say I love the execution, but am not so psyched about where the ending strongly suggests things will go.

Regardless on how a person feels about the final moments, Split carries an efficient script. Weak in spots, sure, and not that deep considering the subject matter of Dissociative Identity Disorder, but it holds interest throughout. It is very reminiscent of 2003’s Identity, without the slightly deeper look at DID that movie possessed, but way more engaging and a much less dopey ending.

Split features better acting than that movie had from its leads, however. Can’t really say that James McAvoy carries this, but without his impeccable talent switching, sometimes mid-scene, this would be a feature that would probably split apart at the seams. McAvoy doesn’t get to act out all 24 personalities, but he probably could. The few he does show are all different and feel like full-on characters, He dials up humor when the script needs it, but transitions into menace effortlessly. He’s an obvious standout, but Anya Taylor-Joy and Betty Buckley create a triangle of great performances.

Taylor-Joy’s work takes a little while to appreciate, if only because it takes a while to see how she fits into everything, but she has an amazing arc that provides Split with a real emotional component. With some roles, believability is everything, and from the moment Ms. Buckley appears on screen as a therapist with a wealth of information, she has a way of making the audience believe everything that comes out of her mouth. Unfortunately, the roles of the latter two girls played by Haley Lu Richardson and Jessica Lula go nowhere, to the point where one does wonder if the movie could have still been written without them. 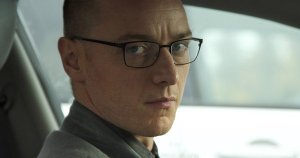 After a long stretch of poorly-received films that could make one believe that a once-promising director could have lost his mind (or at least his passion and skill), I think it is safe to say that with the conlusion of Split, a directorial beast has re-emerged, and his name is M. Night Shyamalan.