My Tweets
Posted on October 14, 2016 by MovieManJackson

*Blows fingers two times before typing this.* Christian Wolff (Ben Affleck) makes his money as an accountant, balancing spreadsheets, doing audits, the like. He’s The Accountant for some of the world’s most dangerous individuals and organizations, working behind an unassuming storefront to conduct his business.

How does he do it, lying in bed with such shady bedfellows? Christian lives with a high-functioning level of autism, which allows him to simply focus on the numbers and do his job, while simultaneously making it difficult to be sociable with people. Seeing some weird activity, the U.S. Treasury Department works night and day to figure out who is working behind the scenes for these organizations, which prompts Wolff to invest his talents in a real client—a state of the art robotics company. However, after clearing the books, something doesn’t add up. But the dead people certainly do, and if Christian isn’t careful, he could be next. 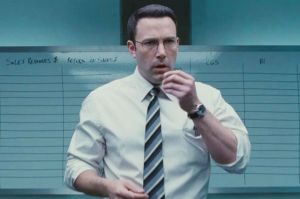 Attention Bryan Mills, John Wick, Jason Bourne, Robert McCall: It is time to welcome Christian Wolff into your badass circle of ass-kickery. Director Gavin O’Connor’s (Warrior, Jane Got a Gun) latest in The Accountant is a lot of things. It’s a drama, it’s an action, it’s a crime, it’s a romance, it’s a character study. Truth be told, not all of it meshes well, but it somehow works…just enough.

In Christian Wolff, The Accountant showcases a very intriguing character. The “exploration” of autism—in this specific case, Asperger’s—isn’t something seen often in movies, so it still feels fresh when done. Going beyond the repetitiveness and physical cues that sometimes define autism, O’Connor fleshes out his lead character with well-timed flashbacks that do their job in understanding who Wolff is and how he has the skills he does. Visually and even musically, the style is pretty cold in its cool blues and dark hues, (in a good way) in what seems to be a direct reflection of it main, mostly expressionless, character.

And one has to give it up to Ben Affleck, who in recent years appears to have found his groove as an actor. No, he’ll never be dynamic or a complete chameleon, but there’s a benefit in knowing how to stay in your own lane and play to your strengths, his in particular being good at being stoic. Affleck is undoubtedly the strongest aspect of The Accountant. He’s not all cold and gloom, though, as O’Connor gives Affleck a few opportunities for dry humor that build a connection with his character, especially when he’s with Anna Kendrick. Kendrick doesn’t have a meaty role, but it is important, and her chemistry with Affleck and how she plays off of him is wonderful without being sappy.

Where the film loses its balance is around the second half mark, in which all of the plot strands, balanced imperfectly but adequately in the first half, start to become a little messy and/or possibly unneeded. The biggest offender is a strand involving two characters played by J.K Simmons and Cynthia Addai-Robinson who are looking for the accountant. It’s a plot that appears important, but is eventually revealed to only be present as exposition that is drawn out to an agonizing length, and at the end, one may be left wondering why this strand was really needed.

As The Accountant moves away from its jack-of-all-trades approach to genre and more into action territory as it goes along, I do believe that the focus on its central character becomes lost. Well, not completely lost, but relegated to the backseat. By the end, what makes Wolff all that different from a Wick, Bourne, Mills, or McCall, all films that are decidedly action? I thought less about the person and more about the action said person committed. With that said, the action itself is well-filmed.

What’s the final audit report on The Accountant? Not a liability, but in need of a few execution adjustments.