My Tweets
Posted on July 2, 2016 by MovieManJackson 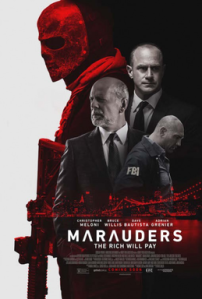 The Queen City has never been more depressing. In Cincinnati, Ohio, a bank robbery is conducted by a highly coordinated unit. The brutal yet efficient nature of it puts the local police as well as the FBI on the case, led by special agent Montgomery (Christopher Meloni).

Days after, another robbery occurs, and pieces begin to start fitting together. Both robberies happen at banks owned by the same person, Jeffery Hubert (Bruce Willis). The question is such. Is the owner of one of the largest bank chains in the US that has been robbed numerous times actually the prime suspect in this case?

With Marauders being filmed in Cincinnati, yours truly, being an Ohio (Columbus) resident, had to watch it, if only to support Ohio! And with a not-exactly-all-star but-still-notable cast that features Bruce Willis, Christopher Meloni, Adrian Grenier, and Dave Bautista centered around a heist plot, the potential for a pulpy lazy Saturday morning/afternoon watch seemed to be high. Sadly, Marauders is a difficult watch, not because of content, but because of simple blandness.

There’s a reason why this didn’t get a theatrical release. It’s not very good, but not all is a loss. Director Steven C. Miller makes a functional-looking film. It is a little reminiscent of Triple 9 and the video game Army of Two with its squad of robbers, but the few scenes that do get action-heavy are the “highlights” of the whole feature, even if heists have been done much better before. Miller for some reason uses a fair deal of unnecessary slow-motion, and an awful cool blue color filter that permeates every outside scene in Cincinnati. These two choices add noting to the experience. 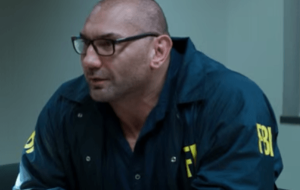 But the plot is where Marauders becomes borderline unwatchable. It is quite the turn of events, given how it starts. That isn’t to say the movie is riveting, but it does set up an interesting crime thriller with the basics of who, what, and why that lasts for about 30-40 minutes or so. Eventually, though, the glut of characters begins to become too much for the film to handle, and the jumbledness and straight seriousness of it all only forces an early checkout. If there were some set pieces, perhaps the movie wouldn’t be so much of a chore in its latter half, but it is pretty dialogue-heavy for a long stretch. Miller and writer Michael Cody attempt to answer a question of whether its right to do bad in order to bring down a greater evil. Not a bad question to pose, but it does rely somewhat on having interesting characters to deal with it.

Few exist here. The only one that does is Christopher Meloni’s, who’s got some depth to his character and feels invested in what he’s doing. But again, everyone else exists, says some lines, goes away for a bit, and then reenters when necessary. One can see Bautista and Grenier trying, but little of substance exists for them to do so. But at least they try, which is more than what the biggest star of the movie can say. Bruce Willis really appears to be sleepwalking through his entire part from the moment he arrives on screen. It is easily one of the more uninspired performances to this point all year. Check is a check, no matter how small the money on VOD return might be. 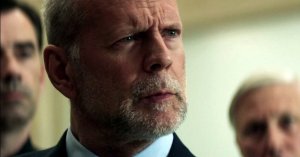 By now, I’ve probably thought too much about Marauders and put too many words towards doing so. Just know that John McClane isn’t walking through that door to stop such boredom from occurring.