I guess this is why living in a cardboard box wouldn’t be a bad thing. After defeating frat leader Teddy Sanders (Zac Efron) in a truly epic battle for the neighborhood block, Mac and Kelly Radner (Seth Rogen, Rose Byrne) now live in peace, raising their youngster and prepping for another. The incoming newborn has prompted the family to buy a new house, and sell their own home. Luckily, they’ve found a buyer.

But, they do have to make it 30 days in escrow before the sale is official. Easy, right? Not anymore, because a new sorority has moved next door. Led by Shelby (Chloë Grace Moretz), she wants to throw parties that aren’t ones put together by douchey frat bros, and has no care if Mac and Kelly lose their sale. Once again, neighbors are fighting one another, and this time, the opposition the couple face appears stronger than before. To dethrone this “Buffalo Bill” sorority, they will need a “Hannibal Lecter” in Teddy, in order to prevail again.

The first Neighbors (or Bad Neighbours as it seemed to be known throughout most of the world) was a relative surprise, both financially, critically, and even in the performance department. Yours truly didn’t love it, but all in all, some good laughs and a nice message were found. The money made warrants a sequel, and here it is with Neighbors 2: Sorority Rising. Is this installment of family versus college social organization as good as the first?

One thing is for certain with Neighbors 2, most people will not be able to claim it to be offensive. Even as an R rated comedy, take out the F bombs and requisite graphic nudity and it is quite harmless when compared to similar movies. It is rather postmodern and wears it on its sleeve from the first few minutes on and throughout. Whether it be interracial marriage, gay marriage, or gender equality, returning director Nicholas Stoller takes the previous template but switches the point-of-view to prevent it from being a complete rehash with a bit more social commentary. 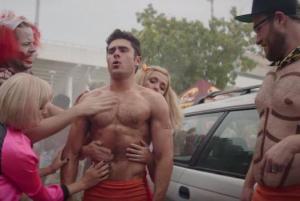 While the plot is generally in the same mold as the first, Neighbors 2‘s plot sadly feels a lot more stretched than the original, not to mention just lacking the laugh out loud humor. A few slapstick gags are effective, but much of the dialogue fails to elicit more than a mild chuckle, at least in the theater I was in. Repeated jokes about Jews, Minions (because Universal is the distributor!) and feminism are amusing the first time, but boring the fifth and sixth times. After a while, the progressive approach, as good-natured as it is, comes off as more of a crutch for lackluster writing as opposed to a support for genuinely funny moments strung together.

The writing does the cast no favors, but all try to do what they can with what is given. Seth Rogen and Rose Byrne still have chemistry, and as such, it hurts more to see their jokes not land because they really are trying. Much more supporting this time is Zac Efron, as self-deprecating as ever. Though he is a supporting character, his entire character arc is most fulfilling and complete, which makes Neighbors 2 as much of his story as the two clashing groups.

Chloe Moretz is talented, but here, she looks to be a little out of her element in comedy, actually somewhat dull in this. Her character has meat, but she’s not the type that one necessarily thinks of when having a huge role in a comedy, and her being in the cast feels more like having a big name attached for the hell of it as opposed to contributing real value. That can be said for most of the rest of the cast, whether returning or new. Many are just there. 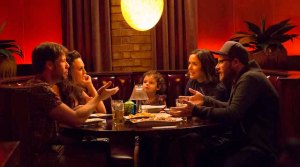 Aside from the themes, Neighbors 2′s best thing it may have going for it is how it ends. There’s real finality that would be undone if another film were to be made. Even good-natured neighbors can become old after a while, right?