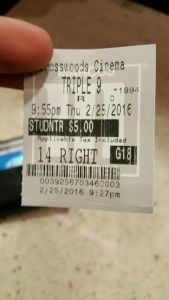 Make a bomb go off, the police are there at the location in three minutes. Do a 999—on the other side of town—and you got all damn day to do whatever you please. On the mean streets of Atlanta, a trio of three men: ex military officers Michael Atwood (Chiwetel Ejiofor), Gabe Welch (Aaron Paul), and Russell Welch (Norman Reedus), combine with a duo of corrupts cops in Marcus Belmont (Anthony Mackie) and Jorge Rodriguez (Clifton Collins, Jr.) to form a squad of five, pulling heist jobs around the area. They work for a Russian Israeli mob boss named Irina (Kate Winslet), who pays them handsomely in return for what she receives in some vital pieces to bring her brother home from exile.

While the crew is ready to leave the game forever after their recent job, Irina forces them to pull one more to get what she needs. This one is impossible however, because roughly a 20 minute window is needed. To get this window, a plan is hatched to execute a Triple 9–police code for officer down. The mark is Chris Allen (Casey Affleck), a good cop with a family who doesn’t deserve this fate.

Think about cop/heist movies (combining the two subgenres here) and there always seem to be a few on top of the list with regards to the best. Training Day, Heat, End of Watch, and Reservoir Dogs are just a few that come to mind. With the cast that director John Hillcoat (The Road, Lawless) deploys here, a lover of the genre couldn’t help but get giddy at the prospect after seeing the redband that Triple 9 could be in that stratosphere. After watching, is it? Not at all. But, is it a solid entry into the genre? Absolutely.

Whether by virtue of the lack of features he’s helmed, the type of features he’s helmed, or for other reasons unbeknownst, John Hillcoat isn’t a household name. Yours truly isn’t saying he should be yet, either. But, what I am saying is that Hillcoat is a master at creating an intriguing and compelling world in his films, and Triple 9 is just the latest example, with this time a modern but grimy setting being at the forefront. Even when the story can occasionally bog down, and they sometimes do in his works, there’s reason to continue watch because the production is of such high quality.

But yes, the actual plot of Triple 9 is not bullet-proof. As mentioned, a few points exists in which it feels like nothing is really going on, and this is where the movie can slow down to a crawl. I want to say that that this is for character development, but that necessarily isn’t the case, although some characters and relationships do get more meat. And honestly, this can all be a little—wait for the magic word—predictable. Not 100% predictable; there are a few third acts surprises that one may not see coming, but without spoilers (hopefully), let’s just say it can get a little bit like clockwork.

Where Triple 9 shines is in its three big set pieces for each third of the movie. These scenes are dressed to the nines with tension and unpredictability, outfitted with a score by Atticus Ross. And, they aren’t action scenes where slugs fly freely into the wind. No, many of the scenes are methodical, and each shot out of a weapon actually means something more than not. Simply put, it is edge of the seat material.

Ensemble casts can be great, but when they are so big, it can become hard to give everyone the requisite attention they deserve. Such is a little of the problem here. Most cover the swath of genre characters, but that doesn’t mean that the performances aren’t what is expected from the talent assembled. The true standout would probably have to be Anthony Mackie, who easily has the most complex character and as a result, gets the opportunity to flex some acting muscle. It’s fun to see Chiwetel Ejiofor play a baddie, as he’s shown in Four Brothers and Serenity that he’s capable, and he has some dark moments here.

Casey Affleck is a sound protagonist, and does his job, but to say he’s asked to do a ton is misleading. In an otherwise serious movie, Woody Harrelson occasionally brings a little bit of lightness to a grim affair, though he can feel a little caricature at times. What is it about crime movies that require an European character to be the big bad henchman? That role falls to Kate Winslet, who doesn’t have a ton of screentime, but is as cold as they come. Speaking of limited screentime, Gal Gadot and Teresa Palmer play the same nondescript role as lovers of the lead characters, just on opposite teams, and Norman Reedus at least looks cool in his minor role. Wrapping the all-star cast up is Aaron Paul, who is rather sympathetic but very “Jesse-ish”, and Clifton Collins, Jr., a chameleon who works in about any role.

Triple 9 is a B movie with an superb cast, which can be a little disappointing with all the talent brought on and the clear directorial skill of Hillcoat. But something so tense, well acted, and produced still should be enough for anyone who is a diehard fan of the genre.