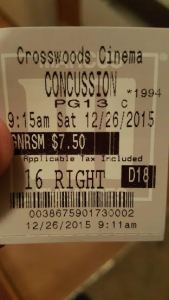 In just about any activity, there is risk. Most people would like to at least know of those risks before engaging in them. Knowledge is power. Pittsburgh based doctor Bennet Omalu (Will Smith) is a forensic pathologist who mostly examines the deceased to ascertain how the patients have died. He’s brilliant, humble, and takes his job seriously for each and every single subject.

Shortly after the death of Pittsburgh Steeler Hall of Fame football player Mike Webster (David Morse), Dr. Omalu is asked to perform the autopsy. While test results show he was a relatively physically healthy man for the age of 50 after playing such a violent sport, the brain shows something different, possibly explaining the reports of Webster’s dementia, amnesia, and general instability. As more research is conducted by Bennet, and more ex-players become deceased, there is a clear link to repetitive head trauma (Chronic traumatic encephalopathy–CTE) and mental issues down the line. This type of information is damaging to the powerful institution known as the National Football League, and as such, the league will do anything to protect the shield.

Football, at least to yours truly, is fun to watch. Every Sunday, no matter the teams playing, I’m watching, and so is most of America. The players are true modern day gladiators, making pretty good money, but also putting their well-beings on the line for mass entertainment. Over the years, many people have argued that the NFL has become “wussified,” no longer the brutal gridiron product of yesteryear.

While I agree a little that some aspects (mainly what does and what doesn’t constitute a dirty hit) can be a little too overprotective, I get the reasoning behind it. Concussion, the dramatized version of the story the NFL didn’t want the public to know, is why. There’s simply too much for the league to lose without safeguards in place.

But those who play the sport, have loved ones who play the sport, and just enjoy viewing it need to know of the risks. Concussion‘s goal first and foremost appears to be an educational one. On an informational note, it does deliver in the way a documentary might not be able to. There’s science in it, but where a documentary could potentially lose people with how formal and terminological some subject matter can be, director Peter Landesman (Parkland) makes the content digestible. One does not need to be a football fan, or a scientist, to understand the gravitas and importance of what Omalu is uncovering, and how it can upset the apple cart. Omalu’s quest to get people to tell the truth is an interesting one, kind of like a poor man’s Spotlight, but not as objective. 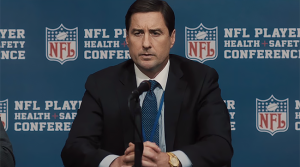 Concussion gets the information and war with the NFL part right, but like some other biopics, it can sometimes focus on too many side matters and efforts to build on its character(s). The way yours truly said this seems to indicate that the film is all over the place, when it isn’t. It is just that a noticeable shift occurs gradually around the halfway point where the story becomes less about Omalu’s fight for justice against the NFL and more about Omalu himself, his family, citizenship, etc.

Dr. Omalu is a brave man, but I’m not sure he’s an intriguing enough character for this shift to be effective. By most standards, he’d be a cookie-cutter character, extremely great qualities but maybe a little too perfect. Simply put, he gets the hero edit, never really being struck with a dilemma or a scenario that isn’t black and white. Perhaps that’s how it was. I’ve yet to really hear Dr. Omalu’s telling of events, but it seems like there’s more under the helmet that could be unfurled, and almost is. This is where a documentary could have delved deeper, and/or have had a more committed focus.

Performance-wise, Concussion gives Will Smith the touchdown he hasn’t had in a while, probably because he’s forced to not play himself. I was skeptical of how he’d come across after seeing the trailer a few times, but Smith is very steady with his Nigerian accent, and emotionally powerful when he needs to be. Despite not looking anything like Omalu, he is able to make the viewer feel like you’re watching him. The same cannot be said for everyone. Only in the movie for a little while, those playing Roger Goodell and Paul Tagliabue (Luke Wilson and Dan Ziskie, respectively) look nothing like those individuals. In Wilson’s case, seeing him trying to act like Goodell with a different hair color is laughable, and a joke. Could the casting decision of Wilson be a meta-humor representation of how what most fans think of Roger? 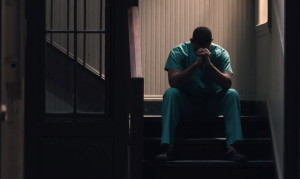 The rest of the cast is filled with solid work. Alec Baldwin comes out of nowhere to bring the film’s most interesting character in Dr. Julian Bailes, ex-NFL team doctor who may be trying to absolve his sins. Albert Brooks makes things a little light but not to a detriment as Omalu’s superior, Dr. Cyril Wecht, and Gugu-Mbatha-Raw, even in a basic role, does good with what is given. Aside from Smith, however, the roles that stick with the audience are likely to be the bit ones done by David Morse, Adewale Akinnuoye-Agbaje, Richard T. Jones, and Matthew Willig. Armed with little screentime, their time is extremely important though, as it essentially shows the audience just how dangerous CTE is.

The truth? Concussion‘s impact is lessened when it focuses on the man and not the story. But when it isn’t, an interesting and information-driven story finds paydirt, quarterbacked by an award-quality leading performance.