“You fight and kill anyone who destroys the peace!”

The life of a youngster can change in an instant. In an unnamed African village, youngster Agu (Abraham Attah), lives a safe and reasonably good life with his father, mother, older brother, younger sister, and grandfather. Even in the midst of oncoming war, Agu and his family are very blessed.

With the incoming forces arriving in their village, all of the women and extremely young leave for safety, but the males stay back and defend what their forefathers left for them. Unfortunately, their defense is short lived, as all are captured quickly and slaughtered, including all of Agu’s family. Agu flees, but is soon found by a rebel squadron with many young boys, led by the “Commandant” (Idris Elba). Facing death, Agu has little choice but to join, and soon becomes exposed to all of the wretchedness of war. 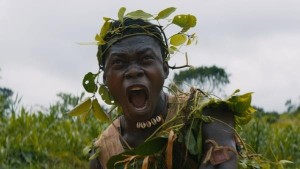 Let’s get this out of the way. Beasts of No Nation is a tough watch, made all the more impactful because even though it’s a fictional story (adapted from a fictional novel), it’s clear that its inspirations come from events in the past like Sierra Leone, and events that are probably ongoing now with little news coverage. It all equates to an unflinching portrait of war and the individuals, mainly the children, who are forced to partake in it.

BoNN is pretty straightforward, absent of a layered plot/storytelling, but the film doesn’t really need it. Early, the audience is shown the life of Agu, in his eyes. It isn’t anything revelatory, or even all that interesting, but I don’t think it is supposed to be. Essentially, its the life of a little kid, which is supposed to be normal and identifiable. Which makes the eventual story shift to the uneasy all the more sobering, because this is a world that few know about.

Written and directed by Cary-Joji Fukunaga (Jane Eyre, True Detective season 1), there’s a real first-person documentary-ish feel in spots that lends to the feeling of authenticity, but also enough space to see the whole picture. For the bulk of the 137 minute runtime, there’s no hope or light at the end of the tunnel to be found, and it is just draining to view. Thankfully, the story isn’t a complete downer, and ends with the prospect of something positive.

The whole cast, from the bit players to the people front and center, is outstanding. Everyone adds to this experience of being unwilling people in a most challenging scenario. But, there are two performances that stand out, and definitely make Beasts of No Nation resonate more soundly. The work that teenager Abraham Attah turns in for his debut is nothing short of amazing, and it ranks up as one of the best young thespian roles ever, as well as one of the best lead acting jobs of 2015. The way Attah moves from happiness to fear to a state of shocking steeliness often all at once is impressive. He’s got this expression that says a thousand words, and his narrating voice gives a lot to the movie in the way of what Agu is thinking.

As pure evil, Idris Elba is magnificent. It’s hard to find shred of humanity in him, but like almost all great leaders, he has a level of charisma and gravitas that is impossible to resist, shown most clearly in scenes where he’s addressing the entire battalion. It’s like Jordan Belfort, but with more menace. And while a definitive African accent doesn’t exist as there are many dialects, Elba sounds legitimate, never struggling with it. It’s a powerful performance that needs to be recognized.

With Netflix being the distributor, not being able to find Beasts of No Nation shouldn’t be an issue. Multiple watches will surely be tough to do (I’m done with one, honestly), but the heavy content matter shouldn’t deter from being viewed.

16 thoughts on “Beasts of No Nation”