Thirteen years. That’s a lot of time for past events to fade away, or to be played and analyzed over and over again. The latter has occurred for Ray (Chiwetel Ejiofor), head of baseball security and former FBI agent. Back in 2002, he and partner Jess (Julia Roberts) worked in the counter-terrorism unit of LA, hoping to prevent another 9/11 occurring in the City of Angels. Upon a routine crime scene investigation that was intended to get closer to busting a terrorism ring, Ray and Jess found the unfortunate: Jess’ daughter has been gruesomely murdered.

Now in 2015, Ray has, for the past 13 years, obsessed night and day to find the killer of Jess’ daughter, and he believes he’s finally found a break. Determined to not let the guilty walk, he begs new district attorney and close friend/romantic interest Claire (Nicole Kidman), to reopen the case. This may be their last true chance at closure. 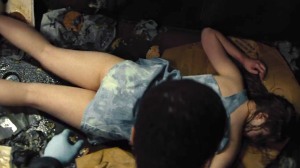 Unbeknownst to yours truly until about a few days upon seeing this, Secret in Their Eyes is a remake of an Argentinian Oscar-winning foreign film known as The Secret in Their Eyes. While it would be easy to say that a remake wasn’t needed (and it’s probably true), I’ll let someone else who has seen the original make that point. As for the Americanized version, it is tough to botch a story that would seem to be a cinch in the thrill department with well-known actors Nicole Kidman, Chiwetel Ejiofor, and Julia Roberts, but that is what happens in “SITE.“

Written and directed by Billy Ray (screenplay adapter of The Hunger Games and Captain Phillips), Secret in Their Eyes is tailor-made, remake or not, to be a taut thriller. Sure, some of the story beats and characters are familiar in the super-rigid superior district attorney (played by Alfred Molina), and the play-by-his-own-rules detective, but they’ve been proven to work over the course of cinema history. And through parts in the movie, thrilling moments do exist, notably some chase scenes that occur at a racetrack and a ballpark.

Instead of telling the story in a straightforward manner, Billy Ray opts to go with a flashback approach. Obviously, the story takes place in 2015, but much of the context for 2015 and how characters go about their business is shown in 2002. It’s not as bad as it sounds, but it isn’t always all that clear, either, as to what is 2002 and 2015. The guide that indicates what period the film is in happens to be the gray in Ejiofor’s hair. The only time stamp needed!

The script that Billy Ray has adapted from the Argentine original appears to be re-freshened to take a look at morality and utilitarianism as it pertains to a post-9/11 world. It is essentially the age-old question of “Does the end justify the means?” To me, at least, that question is always an interesting one, but in order for it to work, the end, or at least a sketch of it, has to be visible. In SITE, the movie is content to just show that terrorism may be a threat in LA, but it never feels like an impending one, making this theme feel shallow.

These are all negatives, but the biggest one that exists in Secret in Their Eyes is the inconsistency in tone. Yes, being dark for the sake of it isn’t the solution, but it is rather shocking that something so heavy with a plot revolving around a child being murdered is kind of treated with breeziness. Not the act itself, but everything around it is sort of overly lighthearted. I do think it ends up undermining what is supposed to be a thrilling climax and twist reveal; my theater ended up laughing at many of the somber scenes. At times, this honestly does come off as more of a romance with some comedy thrown in than an actual mystery/thriller, and the editing does it no favors. Know how in comedies the camera will cut to the next scene after a real zinger? That happens here sometimes, and it’s really odd.

All of this is unfortunate, because Julia Roberts, Nicole Kidman, and Chiwetel Ejiofor is a nice troika of thespians, even if I’ve never been that high on Roberts. But, it is likely that SITE will rank near the bottom of their respective catalogs. Individually, they are good, but the problem is that in this movie, they all need to be believable as a unit and/or pairing. Roberts/Ejiofor work as a pair, but Ejiofor/Kidman are average at best, awkward at worst, and some dialogue and resulting scenes they share are problematic chemistry-wise.

Rotten Tomatoes let the cat out of the bag. Secret in Their Eyes has some good parts, but taken as a whole, it’s on the lower end of crime thrillers that well-known talents cannot make passable. This secret impresses no one.

4 thoughts on “Secret in Their Eyes”