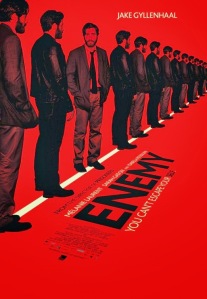 No two snowflakes are alike. But two people can be, and I’m not talking only about identical twins. In Toronto, Ontario, Canada, Adam Bell (Jake Gyllenhaal) makes his living as a college professor of history. It is somewhat of a mundane one, but it pays the bills, puts a solid roof over his head, and has given him a steady, and sexy, girlfriend named Mary (Melanie Laurent).

From the recommendation of a colleague who believes Adam should view more movies more to give himself some variety in life, Adam rents Where There’s a Will There’s a Way, and immediately becomes transfixed on an actor, Daniel St. Claire, who looks just like himself. He takes it upon himself to find his carbon copy, real name Anthony Claire (Jake Gyllenhaal), married to wife, Helen (Sarah Gadon), with a child on the way. It is unclear what Adam is looking for by trying to find Anthony, but he may be making an Enemy instead of a new friend.

Yours truly is legitimately surprised that he has, somehow, been able to steer clear of spoilers, trailers, major thinkpieces, and more regarding Enemy, one of the more open-to-interpretation films I’ve witnessed in recent memory. The movie reunites director Denis Villenueve and Jake Gyllenhaal from Prisoners, and surprisingly, what they have combined to make here is even more layered than their first collaboration. Whether it gets under the skin like that aforementioned film will depend on the viewer, but still, Enemy will probably be talked about for years to come.

To compare this to anything in particular is probably doing a disservice to what Villeneuve and screenplay writer Javier Gullon have managed to come up with here. But, after viewing (and skimming over a think piece), I can’t stop thinking of 2003’s Identity, at least a little bit. That is a fine movie in its own right, except is is very reliant on a twist that leaves nothing to the imagination and can come off as pretty goofy. The great thing about Enemy is the fact that there is no real “twist,” or anything that tells the viewer how they are supposed to see the events on screen. No one involved has come forward to definitively expound on what things mean or how they should be looked at, leaving the final interpretation to the viewer.

With Prisoners and Enemy, Villeneuve has proven to be really adept at asking a question of “How would you react if (insert scenario)…”  For the former, it was finding your missing child. For the latter, it is literally finding your doppelganger. Whether by pure luck or some direct intel on how man reacts to spotting his direct look-alike, Villeneuve captures all of the feelings of this engrossing scenario, from the astonishment and excitement, to the unease and surrealism of it. There’s a lot to take in, but credit goes to the cast for getting most of it in there.

At only 90 minutes, however, an additional 15-20 minutes would have been a nice plus to round out some characters. The actual visual aesthetic of the movie only adds to the bizarre nature of everything, bathed in a rusty, sepia tone that is equal parts beautiful and even ugly. These scenes themselves often feature minimal dialogue, which gives way to a score that can be soothing at times, and jagged at others.

The same guy playing two different characters that look exactly the same sounds like a potential disaster, but Jake Gyleenhaal, with technical prowess from Villeneuve, does it effortlessly. If there were but one criticism, it would be that his characters aren’t all that fleshed out. Or maybe they are, and it requires many views to pick up on the depth. Regardless, Gyllenhaal, and the film by extension, does a stellar job at giving each person portrayed their own personality, yet not making it super-obvious either, if that makes sense. At specific moments, the film doesn’t make it clear whether it is Adam or Anthony in important scenes , and instead relies on Gyllenhaal and its deductive audience to determine who is who. Feels good to not be consistently spoon-fed, sometimes. Both women in Laurent and Gadon pair well with Gyllenhaal, impress when needed, and are the linchpin for many of Enemy‘s themes and ideas. 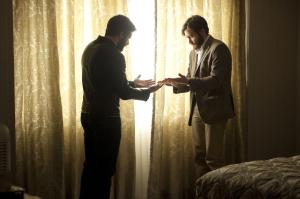 Surely, a lot more could be said about Enemy from yours truly, but to be honest, I’m not sure if I’d be up to the task of stating it in a comprehensible manner. The lack of crystal clarity and shorter-than-desired runtime could be a problem for some, but for those wanting to be challenged by a unique thriller in not just one, but multiple views, Enemy is likely to spark discussion until the end of time.