“Do you feel immortal?”

You can shed the body, but you can’t shed the mind. In Self/Less, rich businessman Damian Hale (Sir Ben Kingsley) has built a New York empire in the real estate/architecture arena. Money is no problem, but health certainly is as Damian battles cancer, and the most optimistic timeframe only gives him a few more months to live. With this realization, he begins to wonder if what he has built will leave a lasting legacy.

Eager to ensure his work will, Damian researches and eventually undergoes a medical procedure called “shedding,” created by a company called Phoenix and its founder, Albright (Matthew Goode). Shedding means moving one’s consciousness to another body, usually a younger and healthier one. Damian’s old body, and life for that matter, is no more, but his consciousness remains in a new body where he is now known as “Eddie” (Ryan Reynolds). Everything seems perfect in the new vessel until “hallucinations” of a past life start to become stronger and stronger. Are they only a weird side effect? Or is this vessel really as empty and hollow as Albright claims it to be?

Is it wrong that I thought of Limitless when watching Self/less? Getting away from the topic at hand here, but it is sort of cool how that totally-not-perfect-but-very entertaining-to-watch 2011 movie has made its stamp on 21st century transhumanist movies such as Lucy and now this. So, is this as fun as those others, either intentionally or unintentionally? In a word, no.

Self/less does possess a fairly unique premise (even if a film called Seconds from 1966 apparently ran with it first), but maybe not as intriguing as other similar films, if that makes sense. There is a real rush in getting into the meat of the story, which ends up dulling the questions the film asks about immortality. It is almost as if the writers decided that simply getting to the moment where the main character becomes immortal in record time is enough to assume that it is important, instead of showing more of why immortality is so important to this character, what he really stands to lose if he dies, etc. 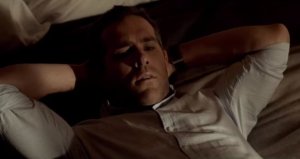 As it stands though, director Tarsem Singh (The Cell, Immortals) gets away from the science fiction set-up and opts for the more standard and unoriginal action thriller that looks no different than the average spy production. Really, it doesn’t look bad as the action is more than visible and shot well enough, but it is shocking and somewhat comical (wait for the flamethrower) how quickly this becomes a run-of-the-mill thriller. Once a character pulls out a handgun, the movie charts itself on a irreversible and mundane path that makes the second half of the 116 minute runtime awfully long. At least it has some catchy music that takes advantage of the New Orleans setting.

With a few tweaks and more time for the ideas to simmer, it is possible that the movie could have registered more both emotionally and thought-provoking. Saying that, however, yours truly is a little pessimistic if that would have definitely worked to a higher degree. Unlike Limitless, where almost everyone could relate to and even desire to be a laser-efficient person who used every single nook of their brain, I’m not sure how many people really relate to the idea of living forever. There’s enough out there that points to the belief that even if it were possible, it probably wouldn’t be a good idea. As stupid as it sounds to pick on an idea from that viewpoint, there may be something to it.

The actors give it their all, certainly. In what may be a surprise to some, Ryan Reynolds has some good moments, and he’s strong in scenes where he reacts to the side effects of the procedure. However, he’s just not the type of guy, as Grantland’s Wesley Morris  states, that can raise the fortunes of a flawed film. Ben Kingsley looks only to have been casted to have a big name attached to the project.

As the clear-cut foil, Matthew Goode is a good presence, even in the most basic sketch of a villain. In either a wink to the audience or just a coincidence playing a character with the name of Anton, Derek Luke makes an appearance. As a driver of the DL bandwagon, it is always cool to see him in anything. His character is sort of crucial, and considering that I was unaware of his appearance in this, one of the few positives to give with this is the fact that he was hidden from the trailers, which actually made for a nice first twist.

Still, even with notable cast effort, Self/less is largely uninteresting and overlong, which is a shame as the summer could use a respectable sci-fi right about now. It’s completely fine to be selfish and save some money sitting out this one.