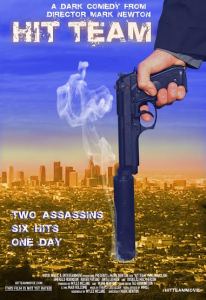 “Sexually control this, you ass***e!”

Mix a bit of Chuck with a hint of Beverly Hills Cop and a dash of The Other Guys, and what forms as a result? Hit Team. Max (Myles McLane) and Ruthie (Emerald Robinson) are two hired assassins who have just traveled from Las Vegas to Los Angeles. This duo is far from an efficient one, but their task is what you would expect out of hired guns. They need to kill six people in 24 hours, per orders from the head honcho Michael Cunningham (Douglas Macpherson).

Their hits go as planned for the most part until one goes awry and forces the duo to become the hunted and not the hunters, as their error spurs their mob boss to come down with his own hit team to try and eradicate the people he hired. If that pursuit wasn’t enough, throw in two barely competent detectives in Akeem (Roger Payano) and Cynthia (Anita Leeman) who are somehow hot on their trail.

Yours truly was asked to check out and present thoughts on 2014’s Hit Team over Twitter by its writer, one of its stars, and well as producers Myles McLane. It isn’t often that I get the chance to see smaller, “drop in the bucket” films like this, so the opportunity was relished. With words of potential cult classic being thrown around however, Hit Team appears to be a ways away from that, sadly.

On a production level, Hit Team is more than competent. It is unfair to compare its level to flicks that hit theaters every weekend, but for what limited resources director Mark Newton and producer McLane had at their disposal, more positives than negatives exist. The background music, sounding like it spawned from a keyboard synthesizer, matches the oddball happenings. Sure, there may be some dubbing issues and the blood effects near the end can often look too comical (MS Paint maybe?), but generally speaking, nothing strikes one as being overly egregious when the smaller nature of the movie is taken into account. 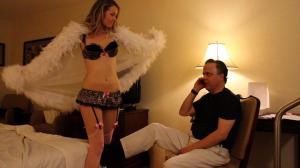 With production limitations, a well-written story can still be had. Unfortunately, there doesn’t seem to be much of a solid one here. The movie does make it relatively clear that those doing the killings aren’t exactly the best of the best in their line of work, or even like what they are doing, but jobs are jobs and both appear to need work. Along the way, a bit of insight is given to the two main characters, but do not call their arcs fulfilling or anything.

What the movie doesn’t make clear, unless something was missed, is why these specific six targets need to be eliminated. Truth be told it is usually some people on trial for witnessing something that was not supposed to be seen, and their elimination is paramount to the protection of the criminal empire. Use that assumption.

Relating to the assassin aspect, and this may be a personal peeve, but seeing all of them occur in the day in open areas became hard to overlook. Now, the plot did mandate that the two had roughly one day to hit their marks, which meant some daytime kills. Yours truly wasn’t asking for some Hitman, Agent 47-like disguise and elimination work, but c’mon! Where and when many of these hits take place it is hard to accept that no witnesses would be around to see or hear anything.

The comedy looks to be what Hit Team would hang its hat on. As with any comedy, what does it for one person will not for another. So much of what is present in this is too much, not from a dark comedy standpoint, but how the actors deliver the material and what is said. There’s a ton of over-exaggeration along with hammy dialogue that gives the feeling of trying to overcompensate for lack of resources in other areas. And it isn’t just the duo of McLane and Robinson, who have good but not scintillating chemistry, but everyone who shows up here whether it be for just a minute or longer. Some lines do work for sure, but as a whole it begs the question if the humor would have been more effective if it were toned down and the actors were allowed to be more natural.

At the very least if people play their cards right you can see the potential, mainly from Emerald Robinson and Myles McLane, to gain more and more steady work. As it stands with Hit Team though, the mark is missed more often than not.

The Movie Man would like to personally thank Myles McLane for reaching out and making the film known, and best of luck to him, Mark Newton, Emerald Robinson (smoking!) and the rest who appeared in Hit Team, which is available on YouTube, https://www.youtube.com/watch?v=X8RGmsjUnNE&feature=youtu.be, for viewing.