“I would have thought with all those brains you got, you would’ve figured out the game I’m playing by now.”

Having a big heart is great, but it shouldn’t cloud judgment…especially as it pertains to inviting a very random stranger inside your home. In No Good Deed, Colin Evans (Idris Elba) is an extremely dangerous convict serving time for crimes he has committed, many domestic. He’s a man who uses his charm and good looks to get in with the ladies, but when things go off the rails, so does he.

After an unsuccessful parole hearing, Colin escapes out of transport and is back in society ready to terrorize it. On a rainy night, he arrives at the doorstep of Terri’s (Taraji P. Henson) home, needing to use a phone after a car crash. Weather is less than ideal, and Terri lets the stranger inside, having no idea of what is in store for her and her children.

When you’ve seen one home invasion/killer psycho flick, it can feel like you’ve seen them all. Such is the case with No Good Deed, a film as standard and formulaic as can be with the subgenre. It is unfortunate, because the film has two very respected and talented actors in Elba and Henson, but their talents for the most part are wasted. They are done no favors with the script, as it is apparent early on that it is a weak one.

Heavy, relentless downpour that is supposed to evoke dread? Check. A house sort of secluded from everything that makes it hard to get help? Check. Woman having implied marital problems, so she’s immediately attracted to the stranger? Check. I could go on some more, but it would become repetitive, like the movie’s scenes that follow the same structure of encounter, struggle, and chase.  Around the middle it changes briefly, but returns to the structure in the final act in a different house. It would one thing if this familiarity existed and the plot was competent but it really isn’t. Even at 84 minutes, the movie is stretched because it really is nothing more than a cat and mouse battle in a house and it gets old after about 10 minutes of it.

Furthermore, many moments occur because there would be no movie without them, no matter how illogical they may be. There’s even a large effort to bring everything together with a twist, and while I won’t spoil it since it is sort of well-crafted (after thinking about it) with clues interspersed just enough, it’s not one that is impressive. While it can be argued that it gives some context as to what the antagonist is doing, it is just way too convenient and neat for my tastes.

Idris Elba and Taraji P. Henson do their best here, even if they never fully “click.” Henson is fine here, but has been better in other work. Part of that is just the character itself. Her role is that of a stay at home mom with hubby issues who was once focused on her career, which just isn’t that meaty. What is odd is how her character makes it a point to mention that her prior career in crime involved knowing and diagnosing domestic perpetrators and traits she looked for. You know, the same situation she finds herself in this movie! The people in charge of this probably thought it would be a nice addition to the character, but all this lack of awareness does is paint Terri as a buffoon.

Elba’s role isn’t a dynamic one, but he plays it well and it is the one of the few things No Good Deed has going for it. His Colin is sharp, physical, and nuanced, and Idris possesses a load of screen presence. His character’s omnipotence in the sense of being able to be right where he needs to be when needed is awfully convenient for the movie, but it is what it is. He’s not reason alone to recommend but he definitely brings some good to this. The movie is mainly a two person show, but Leslie Bibb gets some time here bringing brief comedy as a flirtatious sex kitten that you just know is going to get it.

NGD is directed by Sam Miller, and this film serves as his first credit on the silver screen. Nothing about it looks terrible, it is just par for the course, nothing more or less. However, since Mr. Miller prior directorial work has all been for TV, the film itself feels like something that could be seen on TV in a made for television Lifetime movie or even on Law & Order. Watching this in a theater didn’t add anything to the flick. 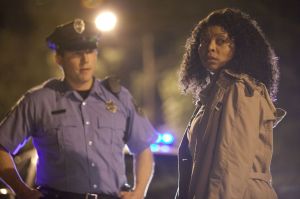 When 84 minutes feels closer to two hours, something went wrong in the process. Greatness wasn’t expected with No Good Deed, but its tired and shallow plot prevents it from being even average despite good lead performances and an alright twist. If interested, the best deed you could do for yourself is to check out on home release.

9 thoughts on “No Good Deed”