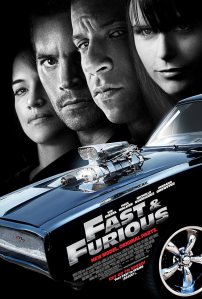 “A real driver knows exactly what’s in his car.”

New model. Original parts. That is the tagline for 2009’s Fast & Furious, the fourth film in the racing series. Though being the fourth film, chronologically this is actually the third, taking place roughly five years after 2 Fast 2 Furious and a few years before the Tokyo Drift installment. Dominic Toretto, still wanted in the United States, now makes his living with Letty, Han, and crew knocking off fuel tankers. While lucrative, the heat on the crew gets exponentially hotter after their garage is raided, forcing the gang to flee.

Back in Los Angeles, somehow Brian O’Connor has become a F.B.I agent in spite of the trouble he put himself into previously. No matter, he is hot on the trail of Arturo Braga, a worldwide heroin drug lord.  It is around this same time that Dom reappears in LA, now looking for vengeance after being notified of Letty’s death. It is not long until their paths intertwine, and their once doormat feud comes back to the forefront reignited.

Now a little over 5 years since this has been released, this movie can be examined through a lens so to speak. Fast & Furious remains sort of dumb, not really that well acted (but not pitiful), and CGI-heavy from time to time. But with that said this movie served as a litmus test to how much moviegoers desired to see Dominic Toretto, Brian O’Conner, and the rest of the crew again, and the final box office results proved that there was still potential in this gang (363 million worldwide). Previously focused entirely on street racing, F&F started the franchise’s trend to break away from the illegal pasttime and become more “sophisticated” from a plot standpoint. F&F is not a flawless tale, and it again is hurt by an extremely weak villain, but I definitely had a feeling that a strong effort was made to inject more weight into the story.

I am not ready to say this is entirely character driven, but the two leads have never been more developed. In a nutshell, both have internal and external strife to overcome. Toretto is now focused on revenge and shows more uncertainty than ever before, while O’Connor is ultimately struggling with his morality. Sure it sounds simplistic, but here it felt perfect within the confines of the story, and it ends up painting a darker entry than previous films.

Yep, Fast & Furious is way more darker than anything before it. Street racing isn’t exactly a safe hobby, but the previous iterations never came across as truly life-threatening for their main characters. Here, with the added desperation, the danger behind the wheel and in everyday settings came off as more perceptible, to me at least.  Even the style that director Justin Lin showcases comes off as intentionally minimalist and lacking in vibrancy, aside from the few car sequences that feel too polished due to CGI. 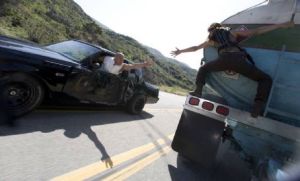 If you have made it through the previous first half of the franchise, you have definitely witnessed cheesy and/or badly delivered dialogue. Which should be to no one’s surprise, this rears its head here in certain scenes. I hate to say it, but the worst offender is Paul Walker. His charisma is there, but he is forced to deliver some fairly heavy scenes, and though he doesn’t fail at them all, a few fall horribly flat. Vin Diesel is surprisingly competent, in his “Vin Diesel” way if that makes sense.

Michelle Rodriguez is not around long enough to make an impact, and Jordana Brewster is the obvious love interest of Walker’s character, rendering her role one-note. At least they’re attractive. To this point in the series’ existence, there has never been a truly interesting villain, and the trend continues here. Nothing about the man is memorable or even formidable, and for most of the film he is just really weak.

The main draw is seeing Toretto (Diesel) and O’Connor (Walker) back together as a reluctant duo. Clearly, they are better collectively than individually, and there is so much natural chemistry the two possess that makes the movies good fun. It is clear to see that the two had a great time doing this, and as a result, I enjoyed viewing this. There almost is a sort of nonverbal admittance seen between the two that affirms that the they know that these are the roles they were meant to play. It may sound hyperbolic, but the F&F movies have cemented Dominic Toretto and Brian O’Connor as one of the 21st century’s iconic duos.

Director Justin Lin showcases a very convincing hand in most of the racing scenes, one of note that occurs a third of the way into the movie that will remind fans of the first. Some as previously alluded to fall victim to way too much CGI, and the coolness factor becomes lost. I would have loved to seen some more variance between vehicles. Walker and Diesel still have their signature whips, but for some reason they look less distingushable.

Fast & Furious may have problems, but it also serves as not only an effective reintroduction to its world, but a foreshadowing of what was on the horizon for the future. Fans would do well to take a ride with this gang once again.