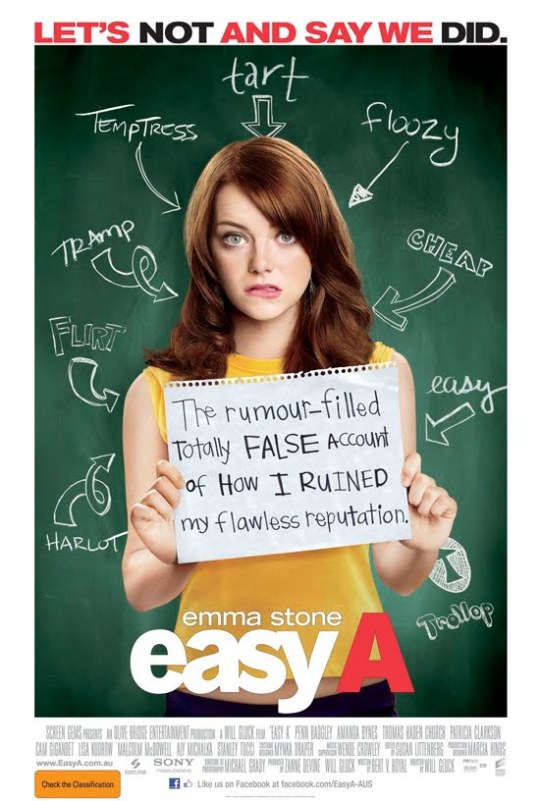 Depending on who you talk to, high school can be an amalgam of the best of times and the worst of times, but often it is remembered as either being a great time or being an absolute drag. One thing that everyone can agree upon? High school rumors spread like wildfire. In Easy A, Olive Penderghast (Emma Stone), is your average and kind of nondescript teen. She has a friend but is not high on the secondary school totem pole of popularity. One day, her compadre Rhiannon (Aly Michalka) invites her on a weekend camping trip with her quirky family, but Olive, after attending this trip before, tells a lie saying she is going on a date to get out of it.

The following Monday in the women’s restroom, Rhiannon incessantly grills Olive about the date, believing she has lost her virginity. While resistant at first, Olive does lie again and confirms Rhiannon’s belief. Unfortunately the Christian zealot Marianne (Amanda Bynes) overhears the two, and before you know it, the rumor of Olive losing it has permeated every classroom and hallway. As expected the details of rumor undertake many iterations, but the understanding is that Olive is now a bold harlot. This sounds like irreparable damage to one’s reputation, but also an opportunity for sizable personal gain. 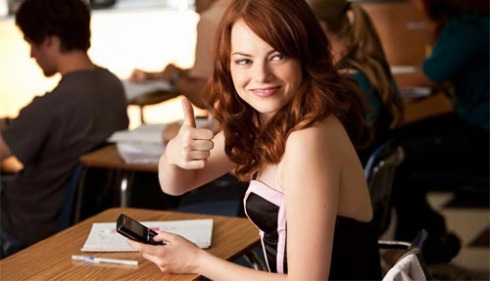 On my first watch, I have got to say that Easy A was not really what I was expecting. I did not love it, but it was enjoyable enough at times. It is definitely a comedy, but not one that will leave you in laughing stitches for a good part of the movie. By and large, it is a movie that relies on its charm, which it does possess. Immediately the similarities between it and 1980’s classics such as but not limited to The Breakfast Club, Sixteen Candles, and Weird Science (which all happen to be John Hughes movies), are pretty prevalent. That is not to say it is a carbon copy of any of these films, as Easy A definitely does enough to stand on its own. But the vibes are there, and it clearly wants the audience to know how highly it thinks of them through injected scenes of said films and the occasional character monologue.

The film is well made, and captures the feel of high school pretty realistically. There are even parallels to The Scarlet Letter book, and the plight that the character in the novel went through in comparison to the film’s main character, Olive. I was pleasantly surprised with the storytelling direction as well. It was a nice little device that gave an interesting take.

But was it funny? That is going to depend on the viewer. I give props to the dialogue, which is sharp, natural, and reminiscent of high school. But for most it, nothing was truly that funny. There are some chuckles to be had, and Thomas Haden Church was my favorite character who had some good moments. Still as a whole it failed to leave a comedic mark upon me. I have to concede that I am probably not the target audience for this movie though, and others who are or who are closer to it will probably find many laughs embedded. The ending of the film felt extremely rushed to me and maybe too much time was spent on the rumors and all of the things Olive was asked to do. Everything just tied up too neat, but it is what it is. Definitely a Hollywood ending without a doubt.

There are a cast of characters, but make no mistake about it, this is Emma Stone’s movie. All of it falls on her, as it is her story. That is a lot of pressure, and she succeeds rather easily. While she had been in previous roles, Easy A really did put her on the map and made people realize her potential. The only thing I really did not buy was the fact that she was so “invisible” at school. She doesn’t do a whole lot for me aesthetically but I have to imagine most guys would have been fawning over her. Amanda Bynes has a interesting character as Marianne, and her scenes with Emma are fun to witness. Aly Michalka is nice to look at, but is unlikable and meant to be funny, but ultimately adds nothing. As mentioned, I loved Thomas Haden Church as the cool but well meaning teacher. I would have loved to see more of him but his role is small. But for the time he gets, he delivers.

Despite my lack of a completely positive endorsement, Easy A does enough to distinguish itself from most teen comedies. It has got some heart and a real direction, even if most of the humor falls flat for yours truly, which is most likely a personal thing. Not ready to give it an A, but still a passing grade.