The depths of hell are not fiery, but wet and 47 meters below the surface. In Mexico, high school sisters Mia (Sophie Nélisse) and Sasha (Corinne Foxx) co-exist with Mia’s ocean-dwelling archaeologist father (John Garrett) and Sasha’s less adventurous mother (Nia Long). Sasha’s popular, Mia’s not, and the two don’t click yet.

Seeing an opportunity to make that happen, their parents send them to an adventure park where they’ll get to see sharks up close in the safety of an underwater ship. That’s lame! Sasha’s friends Alexa (Brianne Tju) and Nicole (Sistine Stallone) entice the two for a real adventure cave-diving in old submerged Mayan city ruins. The foursome finds fun initially, but soon find themselves in the fight for their lives dealing with dwindling oxygen and ravenous great white sharks eager to feed.

If there’s one thing that 47 Meters Down: Uncaged should be commended for, it’s that it stands as the first film since 1999’s Deep Blue Sea to give us a moment that rivals the infamously amazing way Samuel L. Jackson went out. Uncaged (or “47MD:U”) is of course the sequel (albeit tie-less) to an unremarkable-but-semi-diverting 47 Meters Down. Same director, like-minded setup, and skim run-time. Similar quality? Not exactly.

Johannes Roberts presents another tale of attempted survival against sharks. Regardless of how high-quality or not his original installment was (remember, it was originally slated and already flash-released on DVD before a decision was made to purchase the stock and rights and release on the silver screen), there was an undeniable Kaizen-like simplicity to that movie. Sure, the actual motivation of the two sisters undertaking the adventure was asinine, but only having to focus on predominately two people with fodder thrown in as needed allowed Roberts to keep a natural direction. 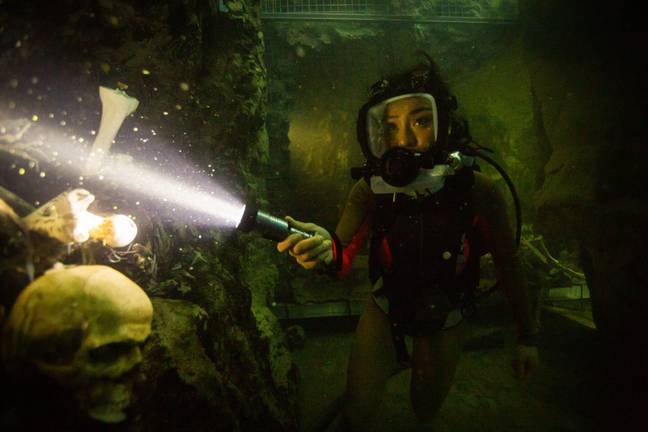 As most sequels/follow-ups go, many aspects are doubled with an increased budget. In 47MD:U, the doubling occurs with the cast, and it makes sense; increase the bodies, increase the kills which thereby increases the entertainment. Right? Problem is, Roberts uses a combination of a never-changing dark green murkiness paired with a dash of Taken 3-like rapid-cuts in the bulk of his scenes that are supposed to sell the movie. You could say it’s supposed to be disorienting, but shark terror (or gator terror) can and has been achieved with clean filming. To his credit, Roberts does stage a satisfying 15-minute finale along with a pleasing kill-scene set to an older musical song that, along with the Deep Blue Sea tribute, serve as the high points of the movie.

By and large though, the filmmaking is as blind as the Great White Sharks that are featured here, with a weird consistency of slo-mo hero shots. Good luck attempting to decipher what is happening underwater, or who it’s happening to. Hard to know whether the offspring of Jamie Foxx and Sly Stallone have any talent when everyone sounds and looks the same in diving gear once submerged. At least the foursome like the camera parading in tight bikinis. There’s a whole three-minute sequence before the expedition that resembles a cringy commercial promotion for living young, wild, and free. All it needed was the product placement of, say, Corona or Ray Ban.

Think about it. Shark films may be the some of the easier films to make competent. Which is why it’s a surprise that even with surface level expectations, 47 Meters Down: Uncaged flails helplessly in open water. SOS unanswered.