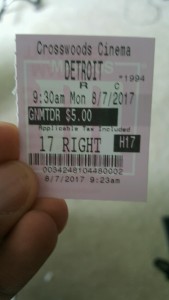 It was once a great American who stated that “…riots do not develop out of thin air.” In America, circa 1967, The Civil Rights Movement is a major fabric of everyday life. The Long Hot Summer of 1967 comprises numerous race riots across the nation. From Newark to Tampa, the disenfranchised and overlooked African-American populace is tired of their voices being unheard.

None perhaps more so, than those who reside in Detroit. Sunday, July 23rd is the initial day of the five-day chaos, but the chaos peaks in the third day at the Algiers Motel. Shots ring out of the hotel window, which draw the local—and mostly white—police force to the scene to neutralize the situation. Here, they will make life an unbearable hell for all—mostly black individuals—who find themselves in the wrong place at the wrong time. 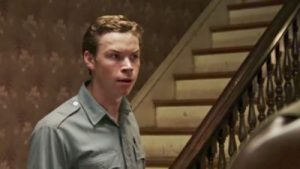 Could we be entering into a period of historical movies that desire to focus on the event first more so than the people who make it up? Just a few weeks ago of this writing, Dunkirk released, focusing all of its attention to the event with little in the way given to the characters who are involved in it. It certainly is an interesting and respected decision, though one that made it hard to really get invested into for some. Director Kathryn Bigelow’s (The Hurt Locker, Zero Dark Thirty) Detroit is predominately concerned with an unnerving singular event, but also chooses to give some attention to a few characters before and after said event. In turn, going this route makes Detroit one of the toughest, yet strongest, watches of the year.

There’s been much discussion on whether Bigelow, a white female, was the right person to direct this film. My opinion? The experience on set her cast seems to outline paints the process as a collaborative one. Also, talent is talent, and Bigelow’s proven herself to be a sound director regardless of race or gender. Aside from a clunky and animated opening that sort of assumes the audience is a little dense, Kathryn’s style brings everything together. The handheld aesthetic and minimal score brings a noticeable rawness and unfiltered grit to everything that occurs in the film, but of course is most noticed in the prolonged 2nd act that is the Algiers Motel interrogation. Many words can be said about this entire act, but I’ll just leave one that doesn’t do it enough justice: Tense. Extremely…tense.

Detroit’s 2nd act is complete perfection, but its first and third acts, far from failures, aren’t nearly as flawless. In the first act, Bigelow and writer Mark Boal weave in and out of some of the main characters’ lives who will later be trapped in Algiers. This hopping around isn’t seamless, but, it does give the audience an opportunity to connect with some of these people, some of whom have more meat than others.

The final act simultaneously provides closure and foreshadows to the future. It could be a movie of its own, which is its biggest flaw because it doesn’t get the attention needed to resonate. Instead, these court proceedings and controlled interrogations end up feeling a little tacked on. However, one has to take into account that some of the specifics are imagined due to a lack of hardcore facts, and the movie doesn’t hide that in showing an end card that states this. With that in mind, the writer/director tandem team have done a largely impressive job of making this feel real and not overly Hollywoodized.

From a performance perspective, there isn’t one that qualifies as weak. From Jason Mitchell to Anthony Mackie to John Krasinski, everyone brings weight to their roles, even if the writing for their characters takes a backseat to the event. As stated, the event is the character itself. But, there are three characters that stand above the others and as such, three acting roles that could get some possible awards buzz. Algee Smith is probably the breakout star of Detroit as The Dramatics lead singer Larry Reed, a person with all the talent in the world that is too shook go back to what he did before. John Boyega as security officer Dismukes grapples with trying to maintain order while being looked upon as a sellout by his people of color. The emotion he shows when interrogated later in the movie is outstanding. Lastly, officer Krauss (a combination of many officers during this period) is played by Will Poulter. It’s a nasty, frightening performance that never veers into cartoon territory.

Real life or stuff that reminds us of real life isn’t something we always want go to the movies for. It’s one reason why Detroit is polarizing and not being experienced by a wide audience, and honestly, that’s perfectly OK. But those willing to check into an uncomfortable moment of The Motor City’s history will likely be moved.