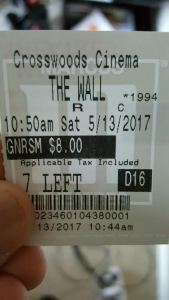 I’ll let someone else make a witty connection between this film’s title and the 45th president of the United States of America. In 2007, the Iraq War isn’t exactly over, but the pullout of American troops is beginning. Called to lookout after U.S. contractors building a pipeline are killed, Army sniper “Eyes” Issac (Aaron Taylor-Johnson) and spotter Sergeant Matthews (John Cena), make a move away from their protected positions to scope out the site. It’s been 22 hours, and they’re ready to be evacuated.

Shortly after inspection, all hell breaks loose. Scrambling from the open space fire, Issac finds protection in the form of an unsteady wall. Desperately trying to request help, his radio is not only damaged in the attack, but tapped by the enemy sniper. It becomes clear that Issac and Matthews are in grave danger, but their stalking assailant wants to play wretched mind games before launching a fatal salvo.

In the vein of 2016’s lean thrillers such as The Shallows and Don’t Breathe is The Wall. Director Doug Liman’s most recent film uses the backdrop of Iraq and the war to provide a movie that is technically a war movie, but sharing much more in common with those aforementioned films than a Hacksaw Ridge, Saving Private Ryan, and the like. The Wall ends up summer 2017’s first 100% lean thriller.

Liman, who knows his way around big-budget features in The Bourne Identity and Edge of Tomorrow, seems to relish in directing on this minuscule scale that The Wall carries, reportedly made somewhere in the neighborhood of 3-5 million dollars. The minimalist approach is deployed, and it does immerse the viewer into its setting rather quickly. Music is entirely absent in the movie; one may forget they’re watching one. Swirling winds, the desert heat, and just the general fear of being in a person’s literal crosshairs make for a harrowing viewing experience, and Liman chooses to give little away as it pertains to his villain’s position. It’s a clever use of space, illustrating that distance between characters may be far, but still very claustrophobic. 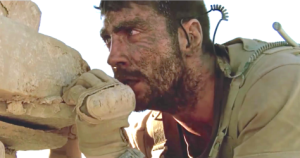 However, even at a tight 81 minutes, I’d be lying if I failed to say that The Wall did not meander occasionally. Gradually, the audience does find out more about Issac and his reason for still being in Iraq as the war is winding down, giving a little bit of an emotional component. As the film goes on, some attempts are made to parallel—and in the case of the antagonist, somewhat humanize—the characters who lie on each side of the wall divide through Edgar Allen Poe and Shakespeare lines. At best, these parallels are broad, at worst, nonexistent. Not exactly painful-to-listen-to dialogue, but the type of dialogue that doesn’t accomplish as much as it wants to, either. As for the ending, it’s a bold direction, if a little farfetched for a realism-focused movie.

Keeping up his hot momentum after his marvelous turn in Nocturnal Animals is Aaron Taylor-Johnson here. His performance isn’t so much character-driven, but draws more upon the overall fatigue and hopelessness, mental, physical, and emotional, soldiers may find themselves into. This is unequivocally his movie, with the bulk of the camera focused on him, though John Cena provides adequate dramatic support in what is easily his best dramatic performance to date. Laith Nakli is the standard, sinister voice that’s needed for this type of feature when a mysterious character is unseen, think Kiefer Sutherfland in Phone Booth and Ted Levine in Joy Ride. 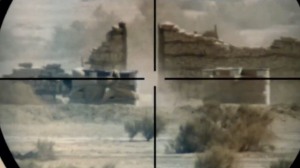 The first real surprise of the year? With a pretty limited script, a good director and strong performances keep The Wall from toppling over, ultimately making for an efficient war-set thriller.

5 thoughts on “The Wall”