Father time is forever, and will always be undefeated. In the future (2029, to be exact), the famous/infamous X-Man Logan (Hugh Jackman), spends his days in relative isolation on the Tex-Mex border, working as an Uber-driver of sorts. He takes care of a physically and mentally debilitating Professor Charles Xavier (Patrick Stewart), still seen as a weapon by the U.S. government. His goal is to make enough money to get away from all of this and spend their lives in peace as the last known mutants on Earth.

Professor X is declining in health, but so is Logan. The Wolverine no longer has the rapid healing factor he once possessed, and each enemy encounter takes longer to recover from. His path crosses with a woman who needs his assistance getting a young girl, Laura (Dafne Keen) to the border of U.S./Canada for her safety. Why, Logan does not know, but he soon finds out that many bad people want Laura for unknown reasons, and unfortunately, he’s connected in all of this. He has to do something, reluctant as he may be. 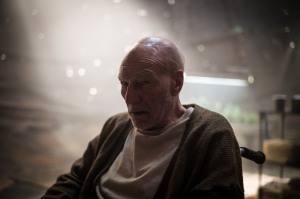 The X-Men, and by the associative property, Logan/Wolverine, have been around for 17 years now. And yet, people never really talk about them or their characters in the same vein like they do an Iron Man, Spider-Man, Captain America, or Batman, despite that 2000 film sort of paving the way for modern day superhero movies. Box-office wise, mutants haven’t carried the same monetary reward like their aforementioned brethren have (though this past weekend, Logan has posted quite the number at 85 million plus, making $400+ worldwide a damn near certainty). My point is, with regards to the characters of the X-Men universe, perhaps we should talk about them in the same vein as those others. Or at least Logan.

James Mangold (The Wolverine, 3:10 to Yuma) returns to direct (and this time, write) Wolvie’s latest outing after redeeming the character from 2009’s disappointment, X-Men Origins: Wolverine. The Wolverine was a good start really expanding its title character’s warrior/samurai backstory/parallels, only succumbing to “comic book-ness” and poor CGI in its final act. But Logan fully capitalizes on the 17 years most of us have seen Jackman as Logan. There’s a reason this is called Logan and not The Wolverine 2 or something similar. This is a very mature, character-focused production that does like to take its time (occasionally, plodding so) in telling its story and relationships.

Of course, there are many scenes that feature the usage of superhero/villain powers, but honestly, Logan never really feels like a superhero movie. And that’s a good thing. It’s integrated with the X-Men universe, but barely. Mangold and Jackson seem to want to have nothing to do with the X-Men universe. I made a point before about how the traditional Western is a thing no longer, but that that modern Western of nowadays and likely, the future, is a genre that is fused with other ones.

Logan is, unofficially, a Western. The old, world-weary outlaw in the middle of nowhere, facing odds that are slim to none for survival against a heaping of mostly faceless opposition, defending something or someone because it is ultimately the right thing to do. Certainly not an original story (shades of Midnight Special and The Last of Us are apt comparisons), but the attention to detail and minimalist scenery Mangold uses to tell this story for a traditional superhero comes off as fresh. Logan, crazy to say, is relatable, in ways most “superhero” movies aren’t.  Sacrifice, pain, and duty are all words floated in many a comic book movie, but in Logan, they seem tangible.

And then there’s the biggest talking point of the Logan movie: Its R Rating. Not much more can be said by yours truly that one hasn’t heard at this point in time, but it bears repeating. This is absolute brutality the likes of few, if any, comic book movies have ever possessed on the silver screen, with amazing sound effects. But it, and the heavy tone in general, feels necessary, a natural progression for the characters of Logan and Professor X making their final stands. Some of the F bombs (and hit/miss humor, for that matter) do feel more like “Hey, we’ve got a R Rating now, let’s throw this around just because!” instead of natural, but most do end up sounding fine.

For over a decade, Hugh Jackman’s been turning in excellent performances as Wolverine, and yet, this is easily his best one as this character. Probably because he has more to do as Old Man Logan. Jackman sells the emotional and physical pain we are witnessed to from the get-go; it honestly hurts to watch him limp everywhere. Likewise for Patrick Stewart, who still serves as a father figure to Logan despite the worsening conditions he’s dealing with. It’s a relationship the duo have always had since the very first X-Men, but finally, it’s fully realized on both ends, as both assume the role of father and son throughout.

Brand new youngster Dafne Keen fits well with the established thespians, not being forced to do a ton dramatically until the end. Too early to say she’s a star in the making (not much to really go off of), but is believable for this part. No one else stands out all that much, even the villain(s) and Boyd Holbrook, not written with much meat, but passable for the plot at hand.

Balls out, claws out. The last iteration of Hugh Jackman as Logan does just that, culminating in an emotional ending that ties any loose ends or lingering matters. A real downer that this is it for Jackman in a role he’s made iconic, but it’s always best to go out on top.

Leave a Reply to Dell on Movies (@w_ott3) Cancel reply