Tell em, Jojo.  Meeting the parents is always a nerve-racking moment for any couple. That time has come for Chris Washington (Daniel Kaluuya) and Rose Armitage (Allison Williams). Chris is Black, Allison, White. Not a big deal, but Chris, nonetheless, is nervous about what her parents may think.

Immediately upon setting foot on their estate, something doesn’t seem right. Rose’s parents, Dean and Missy Armitage (Bradley Whitford, Catherine Keener), are overly accommodating to Chris to prove they are fine with their daughter dating him. And then there are the “keepers” of the land, each African-American, which looks a little suspect despite Dean giving reason why they are there. Could it all be in Chris’ head? Or is there legitimate reason for him to Get Out of this place immediately?

No matter what color a person is, race and effects of it exist on a daily level, especially for minorities. Occasionally it is overt, but it often isn’t. The comedy sketch show Key and Peele did a lot of interesting and hilarious things, one of them being race relations and the minuteness of matters, especially from the perspective of black men. Now, first time director Jordan Peele takes a prolonged aim at black/white race relations in Get Out, using the horror/thriller genre as a lens for satire. It’s very well done as a whole, even if it falls short of top-notch greatness horror genre greatness.

In Jordan Peele’s directorial debut, it’s evident from the first shot that he knows what he is doing. Key and Peele consistently featured a high level of camera work and cinematography not often befitting of a sketch comedy show, and though Peele himself never officially directed, what he was exposed to technically carries over here. He builds a bevvy of memorable scenes with minimal cuts, a harp-heavy score (fitting, actually), appropriate camera angles, and good lighting. Get Out couldn’t be called a pure horror, but for two-thirds of it, there is a real notable atmosphere and mystery (and the requisite jump scare here and there) that compels the viewer to keep watching and feel uneasy.

From a true horror movie sense, the scares that will keep someone up at night don’t really exist in Get Out. From that sense, it is a little of a disappointment. But, it is frightening in a sense because the scenario Peele exhibits is rather spot on. It’s a fear aspect. Relating just a bit to the main character, the small things, like being the only minority in a room, representing an entire group, or people saying how much they like something to appeal to one’s emotion registers the most—well—emotionally. Serious look, but also a legitimately humorous one that utilizes a good mix of humor and thrills for much of the runtime.

But, then there’s the last act. While still very entertaining, it comes off as feeling pretty Key and Peele-ish. Less like a feature film in this part, and more of a sketch. Again, this does not take away from the film’s enjoyment—especially in a packed house—it just prevents it from being truly classic in my opinion.

There are a couple of star-making performances in Get Out. Daniel Kaluuya’s Chris Washington is a great protagonist, written with a nice backstory. He’s asked to do a lot more than trailers and TV spots would indicate, selling the psychological toll that this place may or may not be having on him. There are some really difficult moments that Kaluuya pulls off easily. His chemistry with Allison Williams doesn’t feel cheap or forced, either. Williams, especially, does a job that may go unappreciated until after multiple watches. Tons of analysis can and will be written with regards to her.

Everyone contributes to the humor, written of course by Jordan, but don’t underestimate the delivery and timing aspects that can mar good humorous dialogue if executed poorly. Wouldn’t be surprising if Lil Rel Howery went on a Kevin Hart-esque run after this, he steals scenes whenever he’s in front of the camera. Catherine Keener, Bradley Whitford, Keith Stanfield, and Milton Waddams himself (okay, Stephen Root) may not have big time roles, but they do not take away from the movie. They keep the focus on Kaluuya but always maintaining presence. 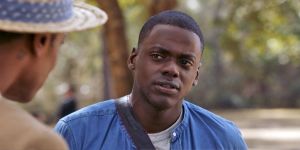 A mind is a terrible thing to waste. Thankfully, Get Out doesn’t waste the viewer’s. Impeccable horror it’s not, but biting social commentary (with some horror thrills mixed in), it is.