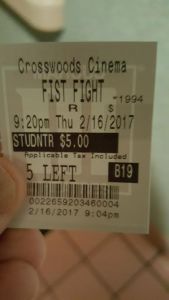 Today is not a good day for high school English teach Andy Campbell (Charlie Day). At Roosevelt High, it’s the last day of school, and pranks are abound. As the mild-mannered pushover, Campbell is an easy mark for students to take advantage of. Doesn’t help that everyone in the high school is up for review, which means possible job losses. Not something Andy needs with a newborn on the way. 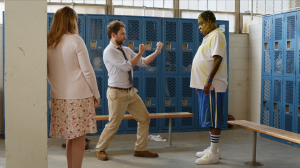 Unbeknownst to yours truly, Fist Fight is an unofficial loose remake/re-telling of 1987’s Three O’Clock High, and even 2001’s Joe Somebody. That alone should tell anyone that isn’t a movie that is looking to reinvent the wheel, just provide some moderate entertainment. Moderate entertainment might not have been seen in the trailer, but Fist Fight is moderately surprising in its comedic effectiveness.

Written by Van Robichaux, Evan Susser, and New Girl’s Max Greenfield, Fist Fight’s plot isn’t something to heap a ton of praise on, and the premise, taking place in one day, can get a little stretched in places. But, there’s nothing wrong with being simplistic. And, the writers deserve one gold star with the overall setup. By placing the film in an end-of-the-year, anything-can-be-done scenario, it allows the movie to be accepted in all of its zaniness much easier. And though there’s the requisite R rated penis jokes and toilet humor, some legitimate physical comedy hits the mark along with improvisational dialogue here and there. Any implied statements about today’s state of education falls flat, though. Blackboard Jungle, this is not. 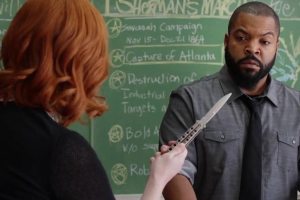 Thankfully, Fist Fight delivers on its title. Spoiler alert: There’s no bait and switch. What’s advertised actually does happen, and quite honestly, it’s better directed than the average Hollywood fisticuffs action scene. I hesitate to say that it is reason alone to give the movie a view, but, anyone wanting an Ali-Frazier throw down (which will be most of the paying audience, myself included) will get one and likely be very pleased with it. Hearkens memory to the 1995 end fight in another Ice Cube comedy, Friday. Not a bad way to kick off a silver screen directorial debut, Mr. Richie Keen.

The cast in Fist Fight doesn’t do a whole lot differently from what they’ve been known for in their careers. Good, if you’re a fan, bad if not. We all know Cube for being the angry, mean-mugging expletive-laden character in everything he does, and we know Charlie Day for being the loud, eccentric, weird sounding passive wimp. They resume these characters here, and are good for what they are, playing off of each other well. Of the two, the story is told from Andy’s perspective, and he gets more of a character arc, albeit a fairly rushed one in the last 20 or so minutes.

Side characters are a mixed bag. Tracy Morgan impresses in his first role back on-screen as an oblivious loser coach, and Silicon Valley‘s Kumali Nanjiani delivers straight man humor. Much like the leads, Jillian Bell has a style and delivery that can grate on a viewer, or ingratiates herself to a viewer. Personally, not a big fan, but fits in enough here. The odd person out of all of this is Christina Hendricks, more weird than hilarious. 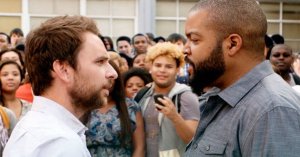 By no means does Fist Fight score a comedic knockout. But by the end of the film’s runtime, laughs hit enough to score a split decision.