My Tweets
Posted on October 22, 2016 by MovieManJackson 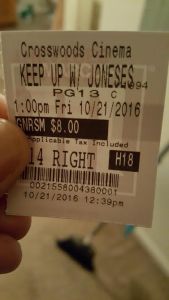 There’s no love stronger than the love between…neighbors? Suburban couple Jeff and Karen Gaffney (Zach Galifianakis, Isla Fisher) are pretty much the definition of basic. Both have solid, if boring, jobs/careers, and have made two children who are off to summer camp. Having the home to themselves for a couple of weeks seems the perfect opportunity to spice up the repetitive routine.

Their routine gets quite the jolt once new neighbors Tim and Natalie Jones (Jon Hamm, Gal Gadot) move into their suburbia cul-de-sac where everyone knows everyone. They’re a perfect couple, perfect conversationalists, perfect everything. Too much so, which raises Karen’s paranoia about what exactly they’re doing here. Acting on paranoia leaves Jeff and Karen in an awfully sticky situation, one in which Keeping Up with the Joneses is the only choice they have for their safety.

The action-comedy (or comedy-action, depending on how you look at it) hybrid genre is one that, in my opinion, offers the best in pure entertainment when a film hits on all cylinders, combining gut-busting laughs with well-done action. When a film is merely average in both areas, you get Keeping Up with the Joneses.

Director Greg Mottola (Superbad, Adventureland) and writer Michael LeSieur do a functional job with their responsibilities. Action-wise may be this movie’s strongest element, with a surprisingly entertaining car chase around the middle. One wishes there was more of that; the climax in particular is underwhelming. The story is fine enough, but the problem is, Keeping Up with the Joneses is a movie that really does outline exactly everything in its trailer, or even 30 second TV spot.

This means that the humor has to land pretty big to overcome this predictability, and unfortunately, the movie’s humor lands here and there but there’s not that one memorable laugh or laughs, at least for my money. That doesn’t mean that Keeping Up with the Joneses necessarily drags; it just means that there’s little beyond the surface level for jokes.

The quartet of Galifianakis, Fisher, Hamm, and Gadot are essentially the film. Mottola positions the couples as equals, certainly not aesthetically, but emotionally. Males and females are paired off together throughout in order to give more depth to the characters and it works, on one side. Hamm and Galifianakis end up building a relationship that is sort of heartwarming and very believable as it evolves. Generally, the best and most amusing moments in the film are the two sharing screentime absent from others. The same can’t be said for Fisher and Gadot. On their own, they are OK characters, but their relationship ends up feeling a little forced. Perhaps it is the chemistry, Zach and John have more of it together, whereas Gal and Fisher never seem to click as efficiently.

Not Kardashian-level bad, but Keeping Up with the Joneses is fine, but ultimately disposable, action-comedy fare. There are other movies to keep up with before this one.

4 thoughts on “Keeping Up With The Joneses: Movie Man Jackson”