The future begins in the remnants of the past. In space, a Romulan, Nero (Eric Bana) is seeking vengeance across the galaxy. His home world has been destroyed seemingly by the Federation, an organization that seeks to keep the peace between worlds.

Nero is from the future, which obviously complicates matters in ways no one is sure of. Receiving a distress signal from the Vulcan planet, the Federation deploys the USS Enterprise to investigate. On the ship, James Kirk (Chris Pine) and Spock (Zachary Quinto) find difficulty in working together due to their conflicting personalities and worldviews. But, the two must come to respect each other in order to save lives.

Franchises like Star Wars and Star Trek don’t just have casual fans, they have diehards of worldwide fans who know every detail and minutiae of franchise lore. Diehards who don’t take kindly to even the slightest bit of change or a reimaging. You can’t please everyone, and the 2009 reboot of Star Trek might not cater itself to the hardcore Trekkie. But, it does pay respect to the iterations before it, while being highly accessible and most importantly, fun.

The director in the captain’s seat of the USS Enterprise is JJ Abrams, who earned his stripes writing and directing the beloved Lost and Fringe TV shows, and blockbusters Mission Impossible III and Cloverfield. Star Trek, like most reboots, is an origins story, and really, it is an origins story of two characters: Captain Kirk and Mr. Spock. JJ Abrams does a ton right in his version, but one of the strongest aspects of his storytelling in this movie is that nothing feels wasted, or elongated for no particular reason. While juggling two stories in about 20 minutes, Abrams tells the audience exactly who these two iconic characters are, and why the audience should care about them.

One could argue, though, that some aspects of the story are a wee bit fuzzy, or a little underdeveloped. Time travel, for whatever reason, always seems to give yours truly a tough time to wrap his head around. The villain Nero is as generic as they come. And Trekkies may not like the lack of meaty themes, something that the original series often included. Even the effective humor could be much for some (this is a very light movie). But, origin stories need not to be complex, just entertaining.

Additionally, Abrams uses his CGI to stage pretty special action sequences, one in particular being a space jump followed by hand-to-hand and ending with a space free-fall that is one of the best blockbuster action sequences of the last 10 years. It’s not just the action, though, its the fully realized environment of space, but also, the fully realized interior of the Enterprise. The ship is a marvel to look at, feels “alive,” and, even if just aesthetically, as important to Star Trek as its characters.

Even with all of the previously mentioned good things, the reintroduction to Starfleet wouldn’t be as well-received if the casting wasn’t up to snuff. Not considering the foil, I do not believe there is a weak link in the crew. Karl Urban is consistently entertaining playing Bones, Zoe Saldana a presence as one of the only females Uhura, John Cho showing he can do more besides being Harold as Sulu, Anton Yelchin being memorable as Chekov, and Simon Pegg as funny as ever portraying Scotty.

But of course, the lynchpins are Chris Pine and Zachary Quinto as Kirk and Spock, respectively. Pine put himself on the map playing the captain, showing off his character’s brashness yet steeliness in the face of peril. It’s a really fun role to watch, even if it can be a little too amped up once or twice. It is made better by Quinto’s precise performance. The two play off of each other well, and are both likable in their own ways, and seeing both characters coming full circle and accepting one another is a feel-good moment. 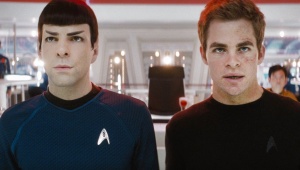 Abrams’ initial foray into the Star Trek pays tribute to what came before it, but not to the point where it is too foreign to the uninitiated. All aboard the Enterprise, because this Star Trek prospers in more ways than one.