My Tweets
Posted on February 13, 2016 by MovieManJackson

Did Hollywood really need to make a movie about How to Be Single? They could have just came to me! In modern day New York City, finding companionship is hard. After four years of being in a college relationship, Alice (Dakota Johnson) feels the need to break up with her boyfriend, Josh (Nicholas Braun) upon graduation—temporarily. Her reason, being, that she needs to figure out some things in the Big Apple. Her paralegal job introduces her to a new friend named Robin (Rebel Wilson), who has no problems being a single lady.

Alice’s older sister Meg (Leslie Mann), also single, is all about her career as a doctor, having no desire to conform to society’s idea of having offspring at a certain age. But, she does begin to get an itch to have a baby after a routine patient delivery. And even Lucy (Alison Brie), a person who makes dating apps, has issues with finding a companion. Being single can be tough, but it also can be very eye-opening. 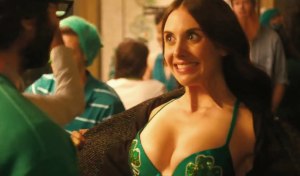 Yours truly probably isn’t in the target demographic that How to Be Single, a film based off of a novel with the same name, is aiming to hit. It kind of feels like a prolonged episode of Sex in the City. Its release comes at a good time, with it being Valentine’s Day weekend, drawing in people that might latch on to it who are single simply because of its title. It’s an average ensemble piece rom-com that has similar issues to most rom-coms, with the occasional solid positive here and there.

Let’s start with some of the positives. It really isn’t saying much, but How to Be Single does feature a little more substance than many other ensemble romance-comedies. A high-brow analysis this isn’t, but it is a fairly interesting look at being single featuring a whole cast of characters who are single, instead of just the one story thread that often appears in these types of movies amid others. Although featuring many characters, the story connector is the same and makes it easy to follow along. Also, though an African-American male and not a Caucasian female (last time checked at least), still being currently single and around the general age of the lead characters, I can connect somewhat to what the main characters experience. Very possible that point alone plays into the fact of me finding some enjoyment in this.

Directing-wise, this isn’t too bad either.  Christian Ditter brings some energy and some mild flair behind the camera with some nice lighting and solid song choices that match the story. Generally, he’s able to keep the movie moving at a solid pace, though at times, his reliance to jump ahead in time for a few months comes at the expense of character and true relationship development.

And honestly, it is the characters that How to Be Single gets mostly wrong. For a movie whose story seems to be pretty focused on reality and finding love in the 21st century, it’s odd as to why the characters could not be written with more layers. The obvious person that comes to mind first is Rebel Wilson, basically being Rebel Wilson throughout. If you find her funny, HtBS is going to be a riot. If not (like yours truly), this can be a chore sometimes as the comedy with her at the forefront never really lands.

Dakota Johnson is a fine actress, but it is hard to really feel anything for her Alice as she repeatedly makes the same mistakes. I understand that that is sort of the point, but her eventual awakening feels more predetermined, rather than earned. It sort of works, but it doesn’t hit emotionally as intended. The women aren’t the only ones who can feel fake. The lead male, Tom, played by Anders Holm, is just way too cartoonish to take seriously.

There’s a missed opportunity for Alison Brie, who appears in the marketing substantially but is clearly the fourth wheel after things get going. She’s off her kilter a tad too much and not exactly grounded, but kind of representative of some people finding love online nowadays. Leslie Mann’s character storyline is probably the most fulfilling, though her character can be a bit much with her “freneticness” and such.

Credit where credit’s due. How to Be Single gets a rose or two for not being completely predictable, having a semi-interesting story about the difficulties of love, and subverting a few rom-com staples. However, it falls short of getting a full bouquet due to a majority of the cast of of characters showing why they deserve to be single.

12 thoughts on “How to be Single: Movie Man Jackson”