A time out is needed every so minutes when watching The Big Short. The year is 2005, and the housing market, and by extension, the economy, is looking pretty damn good. However, there are a few people, like hedge fund manager Dr. Michael Burry (Christian Bale) who believe that the housing market is awfully close to collapsing. Through research, he’s come to the conclusion that more loans are being taken out with fewer and fewer returns.

Not everyone feels this way about the market, but a few individuals hop on the bandwagon. Deutche Bank trader Jared Vennett (Ryan Gosling) gets in on the action early, realizing that Burry’s doomsday prediction is correct…and also very profitable. By accident, this information about the impending housing market makes way into the ears of Mark Baum (Steve Carell), a hedge fund manager at FrontPoint (a subsidiary of Morgan Stanley) who is fed up with the system.

And by virtue of being in the right place at the right time after a disappointing failure, friends and upstart business partners Charlie Geller (John Magaro) and Jamie Shipley (Finn Wittrock) decide to hitch their fortunes to Burry’s projections, needing the intel of a disenchanted and retired banker Ben Rickert (Brad Pitt) to get a seat at the front table. There’s an opportunity to get rich, but nothing is certain. And even if it is, is it worth it to benefit if everyone else’s life is wrecked beyond belief? 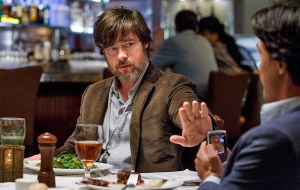 The Big Short features a ton of contradictions. It is made for dummies, and yet it isn’t. It is kind of light, yet also heavy. Simply, the film will not work for everyone, and it has issues that prevent it from being a film without issues. But, it is a film that is hard to not stop thinking about after the credits roll, and for it to achieve that with the story and subject matter it is based upon is an astonishing feat in my opinion.

The housing market and its specific jargon is awfully dense, which should, in theory, make for a dry, and perhaps even dull, movie. Director Adam McKay (Step Brothers, the Anchorman series) doesn’t shy away from it, either. This is about the housing market and the economy, and as such, certain terms are used and need to be. But, McKay does do his best to make the concepts approachable, be it the use of Zach Morris-esque fourth wall breaks featuring actual celebrities, and/or characters in the movie who take the time to explain what exactly is going on at a specific point in time, accompanied with actual definitions for the words that the main characters spout off so casually. It’s a cool device/style that McKay uses pretty well, and his usage of it distinguishes The Big Short from other biographies that can often be too “by the numbers.”

“Cool” doesn’t equate to picture-perfect, however. Know how the phrase of “letting the story/script breathe” is sometimes used for directors with a pronounced style who know when to pull back and allow the story to take focus over their directorial style? Good as the script is for The Big Short, McKay’s imprint is always seen…which isn’t always good thing. As alluded to, telling ‘TBS’ in the same straightforward fashion as other biographies and true stories wasn’t the play with the content matter bordering on boring information overload, but yours truly does wonder if a little more restraint employed by McKay would have made for a slightly more thorough cinema piece. But, credit where credit is due. Never once during the 2 hour 34 minute runtime was I bored.

For every well-used fourth wall break technique, though, there’s one or two (looking at you, Margot Robbie), that either are unneeded, or actually complicate understanding instead of dumbing things down. In addition, it can be hard to ascertain McKay’s directorial goal with this. Is he looking to make this resemble a regular movie? A documentary with a single cam? Maybe even a music video with all of the cuts (literally with the splicing of actual music videos, and figuratively)? Admittedly, yours truly’s thoughts on the film come after Adam McKay’s Best Director nomination, which could lead to a more pessimistic look at the style as opposed to just watching it without knowing of his accolade a few weeks prior. And as said, his style is mostly good for this, if a little overused. While it is an overall impressive job turned in for a man who was only known for doing comedy, I just don’t believe it is Best Director worthy after knowing who else existed as options.

But, a director heavy visual style can’t take away from the acting work submitted by their cast. And make no mistake, The Big Short has great acting. While neither of the four leads have characters that are all that deep, they are still extremely fun to watch. Out of the four, Bale and Carell are the biggest standouts, with the former playing an awkward professional who struggles to connect with people, and the latter tapping into Michael Scott, with all of the zeal that the Dunder-Mifflin manager possessed but none of the stupidity. Gosling and Pitt are great additions and do well with their respective roles as comedic relief and semi-moral center, but get by more with their personas than anything their characters are.

Hardly featured in the marketing yet integral to the story, Finn Wittrock and John Magaro provide the audience with a nice look at how two young guys decided to buck the system. Regardless of how much meat their characters have, what each actor and McKay does do well is refrain from trying to paint characters as do-gooders. Yes, they are nowhere near as evil as those they oppose, but the movie makes no effort to paint these guys as Robin Hood types, either. I found that aspect fascinating.

The collapse of the housing market and ultimately the economy may not seem like a story that would translate well onto the silver screen, but the way it is told in The Big Short makes for a great watch, filled with an unforeseen, sometimes helter-skelter style, and strong cast work. Whether its bubble bursts on Oscar night or not remains to be seen, but in the meantime, take some time to invest in this.

29 thoughts on “The Big Short”