My Tweets
Posted on December 23, 2015 by MovieManJackson 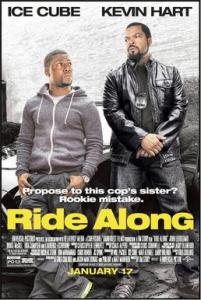 “You got five seconds to pick it up and throw it back!”

Video games can absolutely help in real life, high risk situations. Ben Barber (Kevin Hart) is a gamer, and a security guard at his local high school. His real goal is to get into the local police academy in Atlanta, and he eventually does. Things are looking great, especially with his loving, steady girlfriend Angela (Tika Sumpter). Ben considers this the perfect time to ask her for her hand in marriage.

Only one obstacle. Detective James Payton (Ice Cube) is Angela’s protective older brother, who considers Ben nothing but a joke. He frankly doesn’t like the guy. James comes up with a way to truly see if his future brother-in-law is the right man by taking him on a Ride Along in an effort to scare him away. It’s on Ben to show that he’s a wolf, and not the sheep that James takes him for. 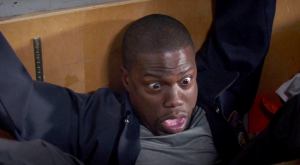 The only time the buddy cop genre was fresh was when the first film came out in the genre. Don’t take that statement as yours truly hating the buddy cop genre. I actually enjoy it more times than not, from Rush Hour to Beverly Hills Cop to National Security. It’s an easy subgenre to get right when everything is clicking perfectly, but can get old quick when things aren’t so perfectly melded. Ride Along sits in the prime meridian of the genre.

Any buddy cop movie has to have good, preferably great, chemistry between its leads. Thankfully, Ride Along possesses that. Taking part of its plot structure from Training Day allows Ice Cube and Kevin Hart to get some easy, but notable, laughs. As All About the Benjamins, 21/22 Jump Street, and State of the Union have proven, Cube will always have a role in Hollywood as the guy who can mean mug and blow up over anything and everything. While he has some moments in this one, he is overall somewhat dull, and more of an asset in those movies (except from XXX2) than he is here.

Though both appear as co-stars in the marketing and marquee, it’s no mystery as to who this movie belongs to. As a man who is more or less indifferent to Kevin Hart, he is the clear MVP of director Tim Story’s (Barbershop, Think Like a Man) feature. He imbues Ride Along with a manic energy that sometimes makes one forget about the averageness—shoddiness, really—of the script. At times, he is like a poor man’s Axel Foley, so seemingly unbelievale and so effortless off the cuff that it is impossible not to laugh and laugh hard. His bits can run too long here and there, and anyone with a dislike of Hart will not suddenly become a fan if this is watched for whatever reason. But he tries, and succeeds to great effect more times than not, as there really are some laugh out loud moments that he delivers singlehandedly.

It’s actually a good thing that he does bring a lot of energy, because without it, Ride Along would be likely to cure insomnia. Exaggeration? Perhaps, but it is surprising that its plot is focused on so much and takes itself so very seriously. I suppose it isn’t horrid, but it is hard to care about who Omar is, who’s peddling what, etc, and it being fairly predictable does it no favors, either. A buddy cop needs to bring the laughs first and foremost, but those successful ones alluded to previously did carry along pretty good scripts all in all, and they also managed to incorporate their stories with the comedy pretty easily. Ride Along feels a little more disjointed with its comedy existing separate from the crime, if that makes sense. 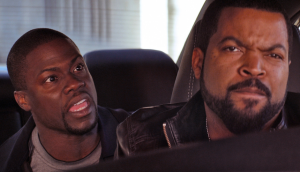 Smoother and snappier rides have existed in the buddy cop genre. But Ride Along, mostly on the effort of a little Black Hammer Hart, occasionally hits it in the right spots.