My Tweets
Posted on October 22, 2015 by MovieManJackson

If yours truly ever gets in big trouble, I want Tom Hanks defending me. The year is 1957, which means the Cold War has just really started to escalate. Spies are deployed by both warring sides, and one KGB spy, Rudolph Abel (Mark Rylance), is captured and brought to America for justice. Justice is used in the most loosest of terms; it is of the belief of everyone that no resistance will be sought by his assigned defense.

The man tasked with defending Abel is James Donovan (Tom Hanks), an insurance lawyer from Brooklyn who hasn’t practiced courtroom law since basically undergrad. Though everyone expects Donovan to play along, he’s a honest man. Which means doing his job and giving his defendant a honest chance. While this scenario is an unlikely one that Donovan finds himself in, it is nothing compared to what he is asked to do later: Extract a fellow American pilot being held in enemy Soviet Union territory by swapping one of theirs for ours.

Historical/biographical movies, especially those that release around Oscar season, can be hit or miss sometimes. At least for yours truly, that is. Part of it could simply be that I am not a history buff; I find it interesting here and there but do not know (or honestly care to know), of every single minutiae of every historical event. Another part could just be that so many of them seem to lack spirit, soul, and the like. Bridge of Spies, at a few times, feels like such. But, it also has the benefit of legends Steven Spielberg and Tom Hanks, two established commodities who know what they’re doing.

Throw those two in with a script helmed by the Coen Brothers, and BoS absolutely affixes itself in the middle of award season hopefuls. But, as Tom states on his blog over at Digital Shortbread, the multiple superstars create an expectation that is really impossible to reach, even for the most optimistic of viewers. Too many cooks in the kitchen? Not necessarily. To the credit of Spielberg and the Coens, Bridge of Spies never feels like separate visions, but it just lacks in the interest factor in spots. 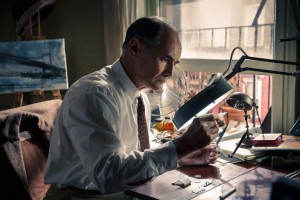 This film may not be a riveting watch, but it is far from a complete chore to get through, and does shed light on a man I knew nothing of. Trailers give the idea that the bulk of the runtime is mostly in court, which probably would have made for a slower watch for a film already clocking in at 141 minutes. But, the courtroom drama only makes up a piece of the story, and it is actually a piece of the story that is intriguing. There’s wonder in how morally righteous lawyers are able to defend people who deserve no such defending, and while Bridge of Spies‘ particular character in question actually does prove to be a guy worth defending, Spielberg and the Coens still show the internal struggle of how it would be the easy thing to succumb to what the public believes, it may not be the right thing. It is more about ideals and justice than anticipated.

Mr. Tom Hanks has never been one of my absolute favorite thespians to watch, but the man is absolutely a professional, workmanlike and consistent in just about everything he’s done, and that is no different in Bridge of Spies. And, though it can get a little repetitive always seeing him as a good guy, he’s so damn good at being likable. His Donovan is an upstanding, idealistic individual in a profession that is often crooked and shady. He’s really an embodiment of America and her truest values and tenets, a man that believes that everyone is of equal value no matter their status. While he is a guy driven by value, he’s not oblivious like, say, Emily Blunt’s character in Sicario. Donovan is almost always kept in the dark, but he’s not shocked nor blind to it. He uses his wit, and sometimes humor, to get out of the most dire of situations.

The stirrers of the drink are no doubt Hanks and Spielberg’s directorial style. Most of the rest of the cast is relegated to the background with little to do. But, if there is a garnish to the drink, it is easily Rudolph Abel, played by Mark Rylance. Honestly, it wouldn’t be crazy to consider the stage actor the standout star. His screentime fades as the plot moves along, but his presence remains, thanks to some superb early scenes that open the movie and ultimately get it to the real second half drama. Abel isn’t bold or even all that layered as a character, but he’s sympathetic and just as likable as Donovan. 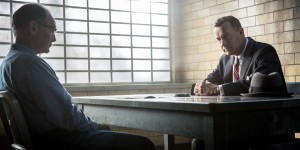 The tandem of Spielberg and Hanks delivers, and should be reason enough for most to take a walk across the Bridge of Spies. Sure, the rewatchability is on the lower end of the spectrum, but as a one-time view, it is a surprisingly interesting and fairly resonant story about what makes America America without being totally preachy.