My Tweets
Posted on July 29, 2015 by MovieManJackson 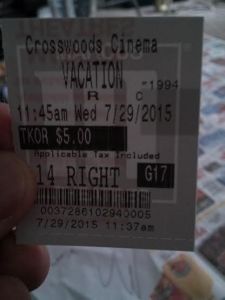 “The journey sucks. That’s what makes you appreciate the destination.”

Like father, like son. Over 30 years have passed since Clark Griswold took his family cross country on a Vacation to Walley World. Through hell, high water, and Aunt Edna, he got them there. His son, Rusty (Ed Helms) is now a father of his own, with a wife, Debbie (Christina Applegate), and two sons James and Kevin (Skyler Gisondo, Steele Stebbins).

Even as a domestic pilot, Rusty feels like he is becoming more distant from his family than he would like. What is the remedy? Certainly not the annual vacation to Michigan. No, this time, Rusty decides to load up the clan in a 2015 “Tartan Prancer” and begin the journey to Walley World. Genetics are passed down from father to son, and so too are vacations from hell.

National Lampoon’s Vacation arrived in theaters July 29th, 1983, and it really served as the template for most, if not all, road trip movies following it. Exactly 32 years later, the 2015 version also arrives on July 29th. It occupies a middle ground of being a direct sequel, but from a story structure aspect, it is a remake. Perhaps a “requel” or a “semake?” Hybrid words withstanding, yours truly completely understands why some will despise this, which I’ll obviously get into. Vacation—not a shocker—does not come close to the simplistic brillance of the 1983 installment. As a 2015 R-rated comedy, however, worse does exist.

In 1983 NLV was a comedy that earned its R-rating, but mostly relied on smart writing and dialogue. There are moments in the new Vacation, written and directed by John Frances Daley and Jonathan Goldstein (Horrible Bosses 1 & 2), that are reminiscent of old, where the material is crude but delivered with the lightest of touches; implied and not overt. Also found are some fairly clever homages to those familiar with the Chevy Chase vehicle, but they work for those who have yet to see it also. But, there are equal moments of dumb, blunt, and slapstick crudeness that often weigh things down.

That may sound like I have disdain for lewd and crude R-rated comedies, but I like to believe I don’t. Honestly, a few of those dumb moments had me laughing pretty hard. But what is a surprise is the reliance on the vulgarity, which can at times be very dark (suffocation, underage sex crimes) and more uncomfortable than it needs to be for something in the Vacation series. The charm is just harder to be found in this one.

To get to Walley World is the true goal of Vacation, but it can become lost, mainly because this film never makes Walley World feel important. Let me explain. In the first, despite everything Clark and company went through, it was clear that all wanted to get to the theme park. Who can forgot the Marty Moose national anthem to illustrate this point? This go around, only Rusty truly wants to go, and Walley World is hardly brought up aside from the beginning and the end. It makes the film feel cobbled together in its craziness instead of building to something substantial.

Enough comparing though, which yours truly hates to do but it is hard not to. The Rusty role, always filled by a different actor in each installment, falls to Ed Helms this time around. He does serve up a lot of the movie’s comedy, and Helms fans should be pleased. Applegate is OK as her character gets a lot to do, as are the kids, though they are written weakly, especially the youngest Griswold who is a pest with 60% of his dialogue being curse words. The performances themselves are fine, but taken as a family unit, the four never seem to give that family feel. At least they ride in a hilarious (fictional) vehicle of the Tartan Prancer, which also provides quite a few laughs. It pokes fun at today’s latest technology and stuff, not knowing what everything does or needing the bells and whistles in the first place.

Many side characters filled by notable actors and actresses make their way into the Vacation universe as well, none being better than Chris Hemsworth as Stone Crandall. For basically his first comedy, he is very natural and charismatic, using his sex appeal to generate humor. Easy for sure, but effective. And of course, Chevy Chase and Beverly D’Angelo make their grand appearance for a brief period in the runtime, serving to link the past to the present. Pleasure to see them, certainly, but nothing more than fan service.

Rusty says at one point in a meta-line that the new Vacation will stand on its own. It is admittedly hard to look at it that way, as this post seems to indicate. But if one is able to, the trip does provide a humorous experience in stretches.