“We just want our daughter back.”

In the world of real estate, it is all about location, location, location, which explains why a house can be built on top of an old cemetery. As long as the headstones are moved, the bodies don’t even have to be. Just casually forget to tell the buyers about that. Eric (Sam Rockwell) and Amy Bowen (Rosemarie DeWitt) have decided to move their family to a new and affordable home, seemingly because of the recent financial hardships they have had.

It isn’t long until youngest daughter Madison (Kennedi Clements) begins to start talking to stuff that isn’t visible to the naked eye. Yet no one picks up on this except for her brother Griffin (Kyle Catlett). Soon, objects start moving around randomly, and things begin to exude strange noises. All of it culminates to young Maddie being seized by the spirits of those who the house was constructed upon. To rescue Maddie, the Bowen family will not have to deal with any regular ghosts, but instead, a volatile Poltergeist that desperately wants to get into the real world. 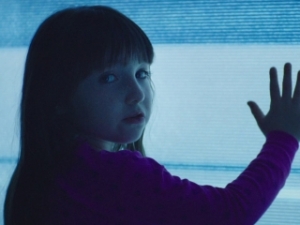 Though yours truly has seen the 1982 iteration of Poltergeist done by Steven Spielberg and Tobe Hooper as a youngster, admittedly it has been a long time since seeing again, and honestly, the only thing that I definitively remember of it is the crawling steak with maggots spewing out of it. From the other little pieces I remember, I do recall it all adding up to create an extremely uneasy and well-paced horror movie. The 2015 version could honestly be a lot worse than what it ends up being. The PG-13 horror house is littered with awful films, so it is a bit of a victory that this Gil Kenan (Monster House, City of Ember) directed Poltergeist isn’t that awful, but that doesn’t necessarily mean that this needs to be seen.

Even if the original was never seen, the story as alluded to is clear, which is a positive. There are some side issues with it that arise, like, for example, how the family has tons of expensive Ipads and such if they are struggling to make ends meet with no one in employment? Predictability is a often negative descriptor, specifically when it comes to a movie trying to scare the viewer. It is found here, maybe not so much in the story but from a scare and execution perspective.

Yours truly is a middleweight with the scary movies and not ashamed to admit it, but aside from a middle scene, nothing will likely induce many “earned” frights. This Poltergeist feasts on jump scares that sometimes do the job, but are so annoying to sit through. They aren’t helped with a generic score that comes off as more cheesy than scary. At 93 minutes, it isn’t exactly rushed, though there is a period in the runtime that is almost “Transformer-ish” in its sensory overload of cheap frights.

So with all of that detailed, why am I not as mad about this as the above would seem to indicate? This Poltergeist is kind of fun, both of the intended and unintended variety. Sure, it can be argued that a more serious tone should be employed, but many super-serious horrors try and fail to be, so why not welcome some lightness in one? Many of the funny bits written actually work. But of course, there are the moments that are funny because they are shoddy, such as the CGI that makes up a bulk of this. The clown bit has been seen so many times at this point that one can’t help but laugh, especially since it goes on for a while.

Unintended or not, it helps to have a guy like Sam Rockwell, who has comic notes and can still deliver the drama. He is a godsend here, and remains one of more versatile performers in the business today. Obviously, he’s done better work, but he is the best of the bunch easily. Everyone else runs the acting spectrum from serviceable to bad, with the young boy falling in the latter delivering a robotic performance with all of this lines said in the same way.

A little torn on this one, because Poltergeist does pretty much fail from a horror aspect, and yet it is more entertaining than it has any right to be. It’s here, and it is watchable with realistic expectations.