(Originally posted as part of the Decades Blogathon, hosted by Tom at digitalshortbread.com, and Mark at threerowsback.com)

What is the perfect woman like? And does she know she is “perfect?” In the state of Connecticut, an quiet and secluded suburb known as Stepford exists. Stepford is a place that photographer Joanna Eberhart (Katharine Ross), her lawyer husband Walter (Peter Masterson), and their two kids will make life relocating from the bustling New York state. On the surface, it is everything one would think a family desires: A safe community, clean air, respectable neighbors, and the like.

Things can sometimes be too perfect, though. For a free spirit and nonconformist like Joanna, an uneasy feeling manifests itself immediately and only grows larger as the days move on. And it is not like she can vent to anyone else. Men are no help, and the other wives in town are the main reason for Joanna’s uneasiness. They want to be nothing more than perfect housewives. The only person she can trust is fellow newbie Bobbie (Paula Prentiss), and together, these two will have to try uncover the mystery of what exactly is going on. 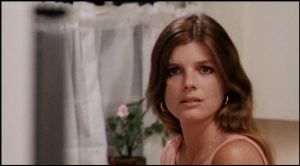 The decade of the 1970’s is known for a lot of things, but perhaps the key thing it is known for is the women’s liberation movement. I am not a historian, but I’ll take an educated guess and say if the 1960’s served as the world’s introduction to feminist ideals, the 1970’s period served as the point in time where the movement really gained steam. The Stepford Wives novel came along in 1972, and three years later, spawned the film adaptation. While the film adaptation may not hold up completely today, mainly because of the different foci feminism fights today, the relevance hasn’t completely been lost either. And just on a more basic sense, it is a watchable, oddly funny, and entertaining little horror-thriller.

The Stepford Wives is very much a satire, a reflection of the world during its release. The core of the plot, and essentially the whole movie, is the clashing of the two differing beliefs of what women should be, and how they should behave. All of the men serve as the establishment, the group in power that seeks to keep its dominance over the opposite sex, either due to fear of the unknown or some other, purely indulgent, reasons. Joanna and Bobbie are the resistance, representing the ideals of second wave feminism, the reluctance to accept what a male-driven society expects them to do in being docile, stay-at-home, and the quintessential 1950’s housewife.

Over 40 years later, the discussion of gender roles in particular is still a fight being fought today by activists, but maybe not in the rudimentary way shown in this movie. Look at the recent controversy surrounding the madness of Gamergate and the uproar regarding the Black Widow character in Age of Ultron. This keeps TSW from being terribly dated, but there is a sense had by yours truly that this is sort of a period piece not necessarily made to stand the test of time (Do filmmakers always go into a production hoping to achieve that? Who knows.).

Simplistic as the struggle may be, seeing these two opposing viewpoints play out throughout the movie is very intriguing…at least for the first time it is viewed. It is hard and maybe a little bit wrong to bring this up, but on subsequent views the mystery, not impossible to figure out even if one has never read the book as “Stepford” is pretty much part of the English lexicon, is less hooking than it is on the first watch. However, a scene that doesn’t lose its impact after endless watches is the final one, chilling all the way up through the final lingering image, and a nice bold decision taken by director Bryan Forbes to end on something uneasy.

Success also has to be given to Forbes for being able to create a level of tension primarily in the day. Unlike other thrillers where all of the juicy stuff happens in the dark, The Stepford Wives goes the other way and features all of its story bathed in sunlight. And it works, whether in a living room, parking lot, or daytime party. These are all settings that don’t scream creepiness, but work more than well conveying it within the confines of the story.

Still, some dirty spots on the linoleum exists. A wealth of hilarious quotables exist throughout, but at times, the rest of the dialogue feels like it is going nowhere, compounded by the film’s somewhat meandering first half. This is where the movie could use some better production values; the music and cinematography can be, to yours truly at least, kind of amateurish. And even with the engaging plot, the leads in Katharine Ross, Paula Prentiss, and Peter Masterson are pretty one-note in their performances (aside from an excellent argument scene between Ross and Masterson later in the film). Honestly, the side characters end up making more of an imprint than the stars do, especially Patrick O’Neal as Dale Coba, a man who surely knows more than he lets on.

Perfect for its time but perhaps a little duller in impact now, The Stepford Wives can still be seen in many respects as a semi-blueprint for similar, later works such as Invasion of the Body Snatchers, The Faculty, and other like-minded films. If watching women doing little domestic chores is your hobby, you’ll find plenty of it in Stepford.